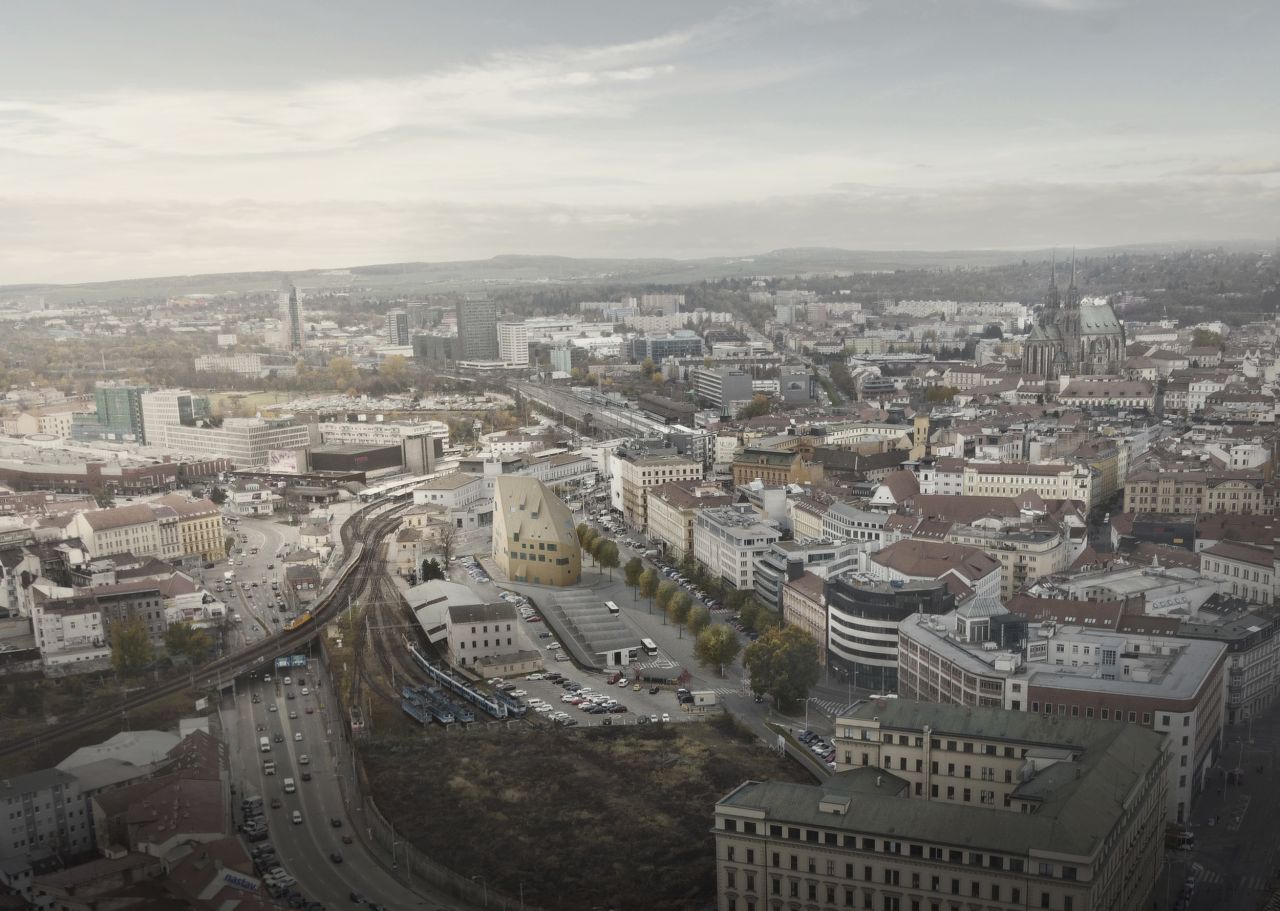 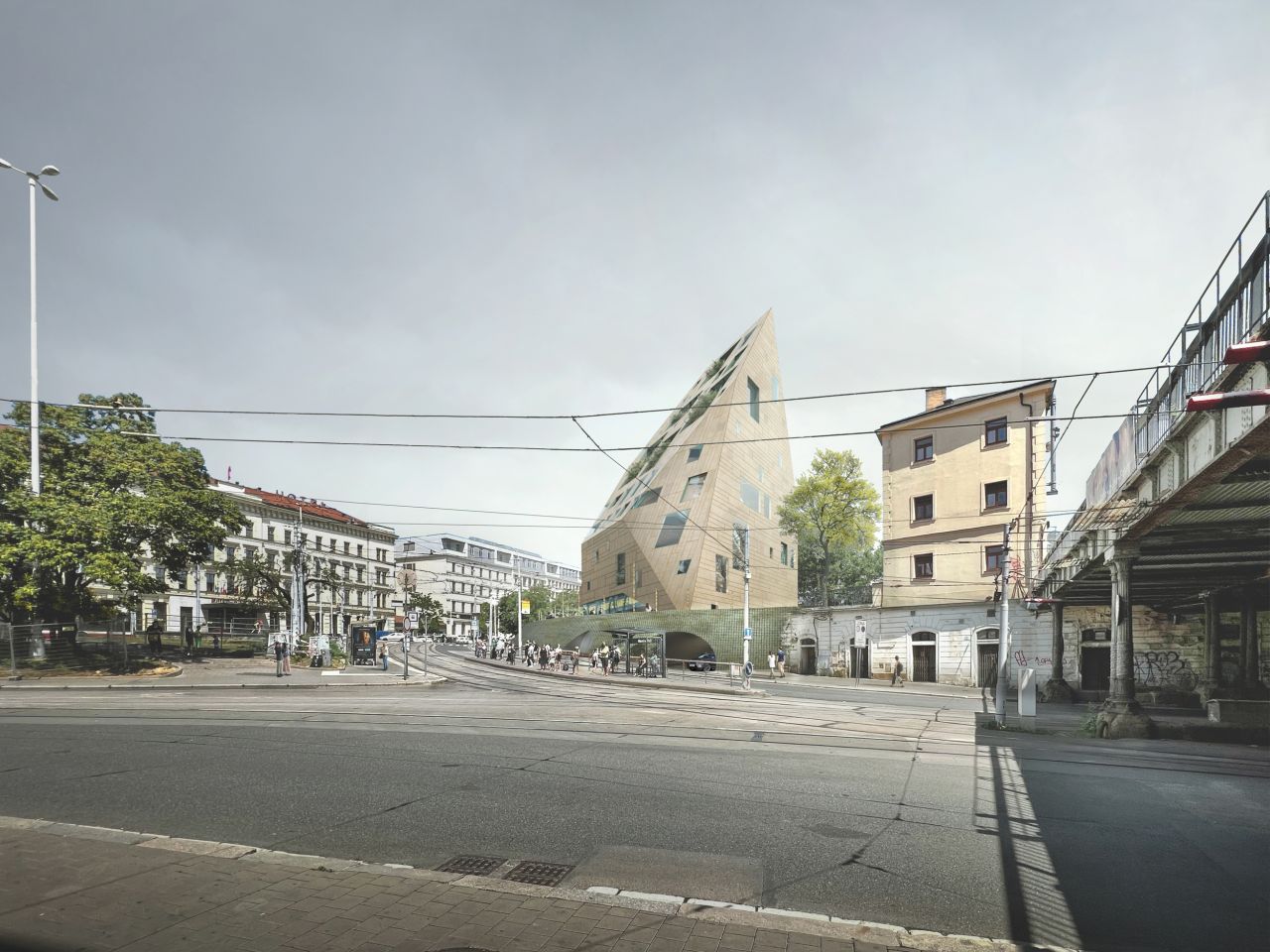 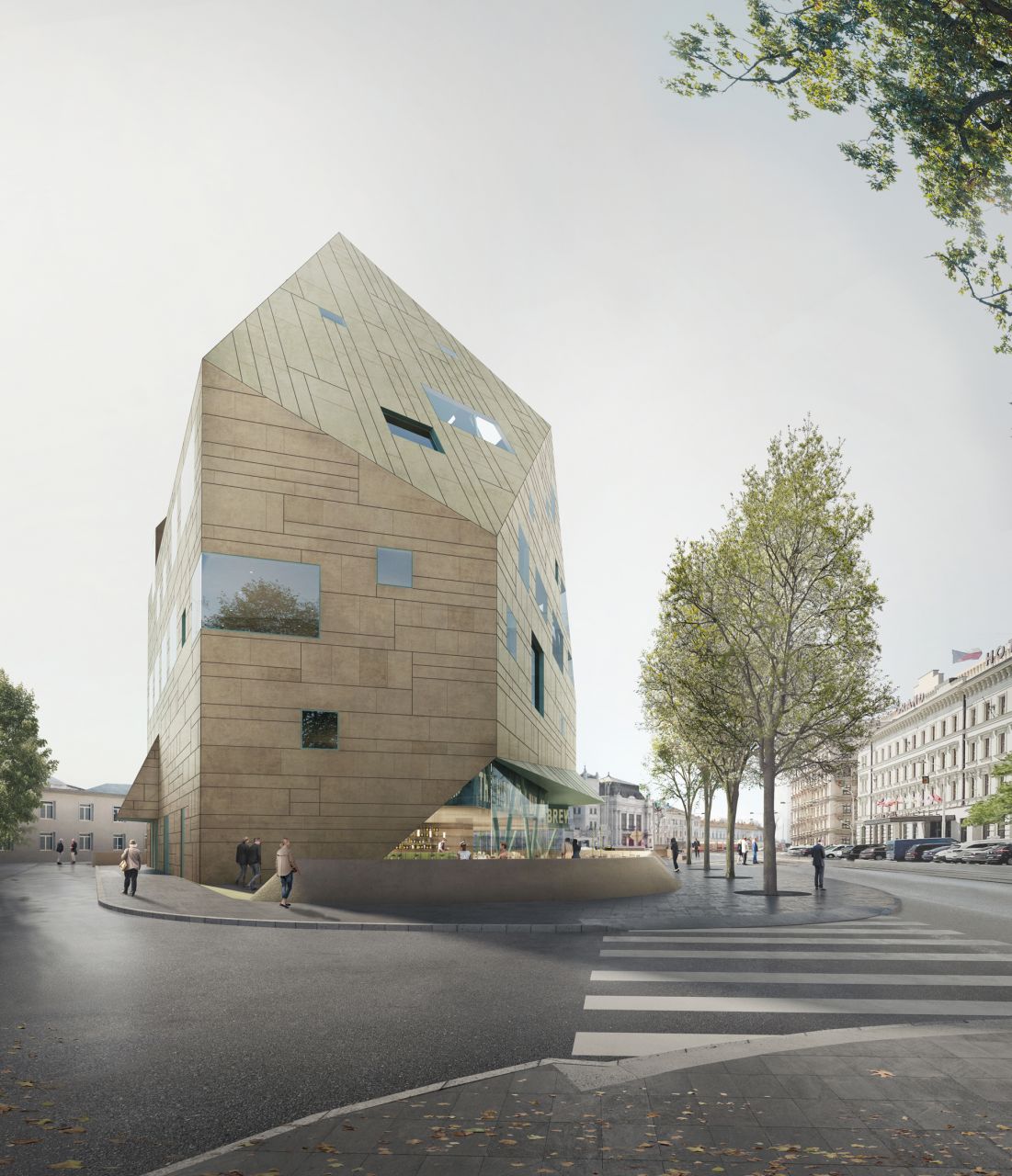 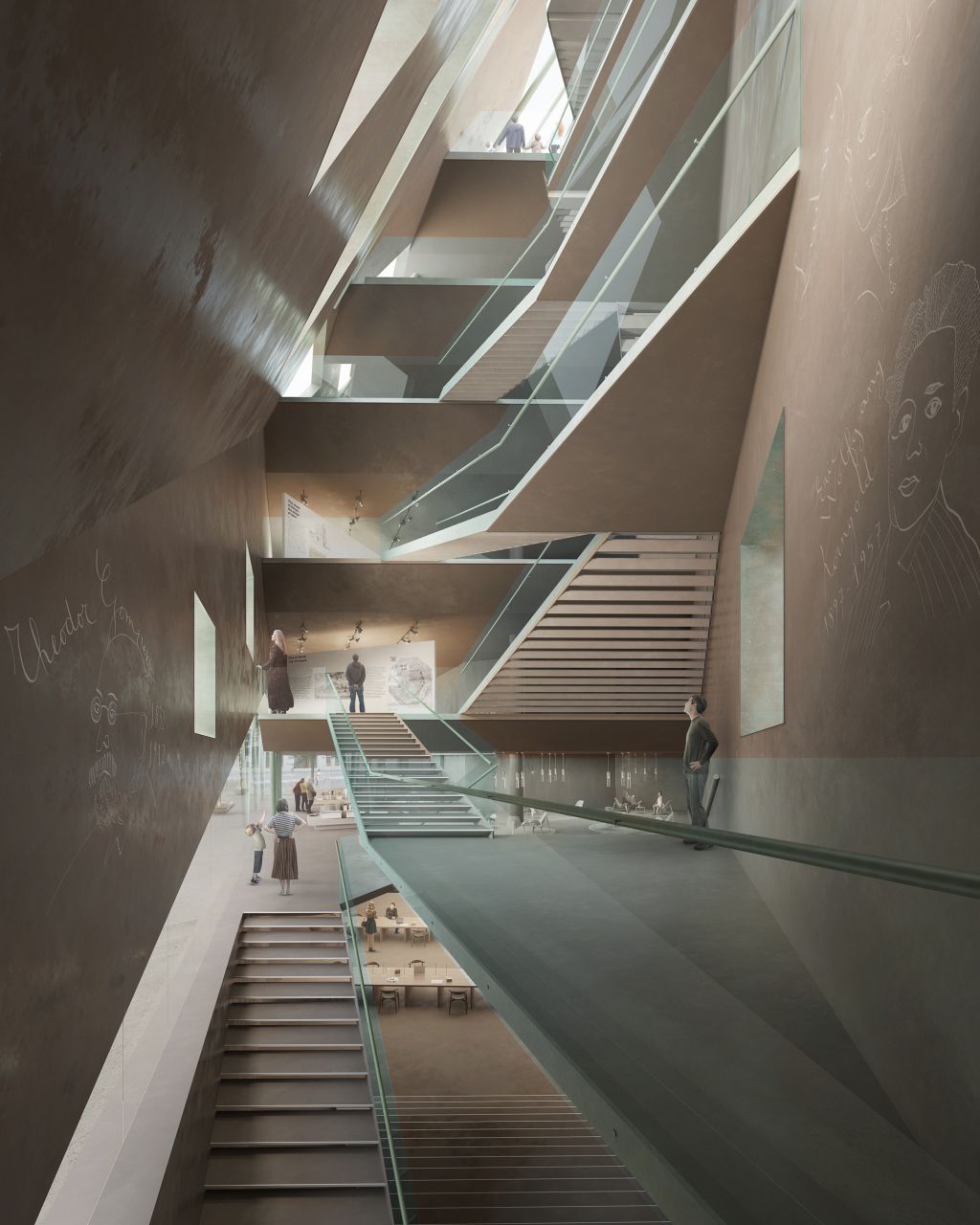 Following an invitation-only competition launched by a private developer - with the participation of MVRDV, Kengo Kuma & Associates and Bjarne Ingels Group – CZA presented its proposal for the Moravian Jewish Museum in Brno.

The project aims to activate the urban transformation of a congested parking & traffic node with a new architectural presence into a dynamic people-oriented place. The museum is designed as a symbol capable of recalling the history of the important Jewish settlements in Moravia in all its richness, including the tragic events of the Holocaust and the subsequent silence of the communist era, by making the authentic life stories of Moravian Jews accessible to the public using 21st-century technology.

The first goal of our design proposal for Brno is the creation of a “sense of place” in what today is an undefined parking lot. To do so, the design of the outdoor open space is the first act, capable of rooting the new building in the wider context. Here, a single volume, an architectural “boulder” capable of establishing a dialogue with other important presences in Brno’s skyline, brings together all the different activities hosted by Mehrin.

The shape of the building solves in a single gesture the relation with the different conditions of its context: the long views from the outer city, the passing trains and the station; the pedestrian dimension of the boulevard; the creation of new pleasant outdoor spaces in harmony with the expected upgrading of the sidewalk of Benešova Street and the osmosis among the above, the main entrance and the atrium.

In fact it is the Atrium the actual node where all the activities meet and enrich each other: the reception and info point, the common services, the café, the museum shop, the elevator and stairs leading up to the permanent exhibition space and down, to the temporary exhibitions, the auditorium and the children’s educational center. 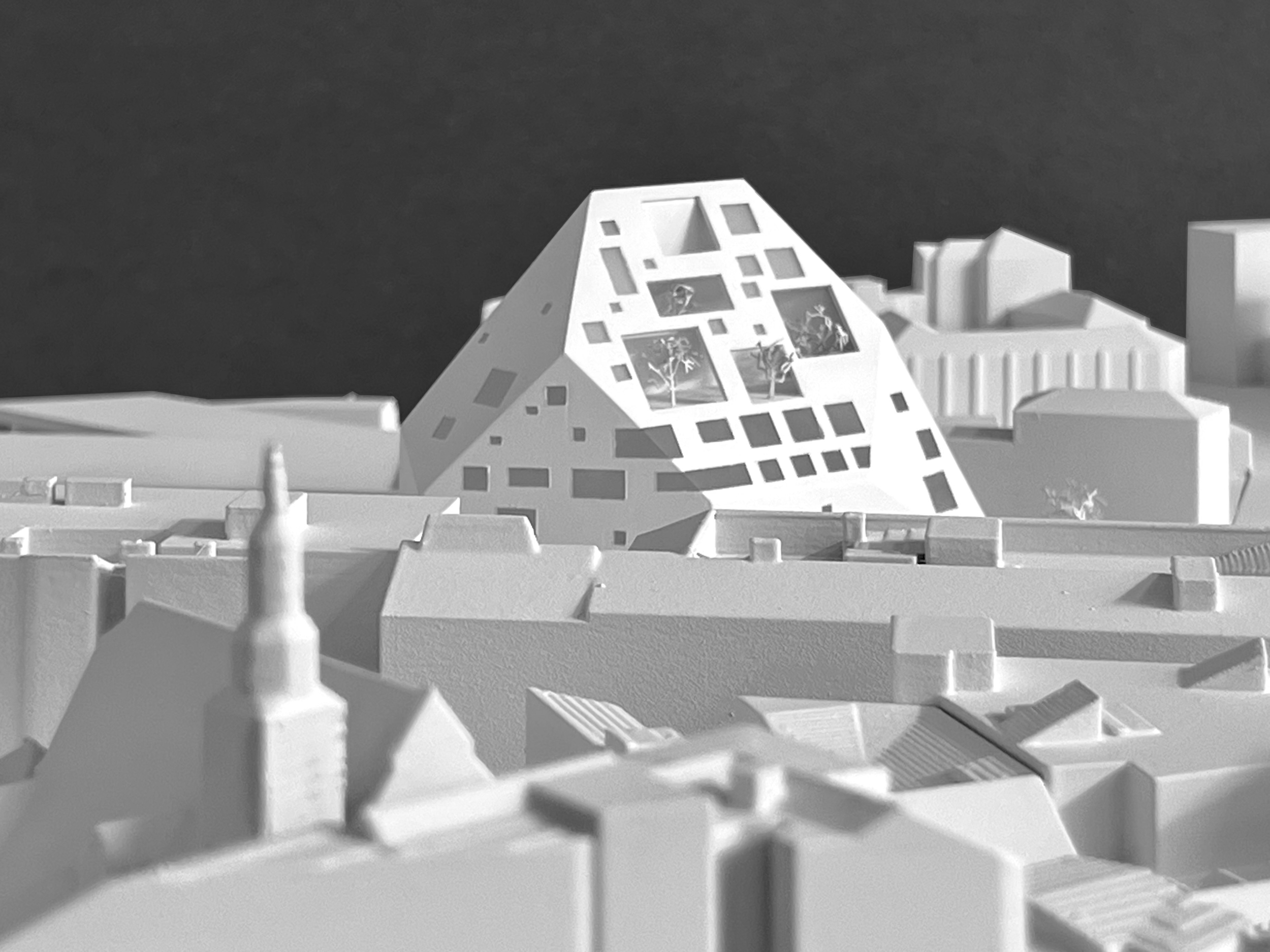 Our design proposal is not suggesting a particular exhibition design, but aims to give to it a very consistent background to operate on, equipped with enough hardware to make its task efficient but with a clear separation between the more strategic spatial configuration of the building and the singularity of the themes that the exposition will touch.

The elevator and stairs connecting the ground level with the two floors of the permanent exhibition and the lower level of the temporary one are considered to be part of a continuous exhibition floor rather that pure technical devices. Their placement one next to the other minimizes the narrative interruption between the floors, allows a number of different layouts whose beginning and end stands connected to the bigger picture. The stair themselves becomes spaces for the exhibition of particular installations by artists working on the themes put forward by Mehrin.

A beloved new architecture for Brno

Our design proposal for Mehrin aims to reach, without any nostalgia, the status acquired by many old buildings: both authoritative and beloved, both simple and rich, both silent and hosting many layers of meaning.

The trees planted in the hanging garden overlooking the silhouette of the old city suggest our new sensibility toward the natural environment, its stone-faced body pierced by abstract windows reveal its inner content, while the transparent public base enriched by sophisticated electronic displays participates to the liveliness of Brno’s urban life.

A new building for Brno’s cultural life: a witnesses of an historical drama but also a vessel to narrate the memories of individuals and of a community whose culture is deeply interwoven with the wider history of Moravia. 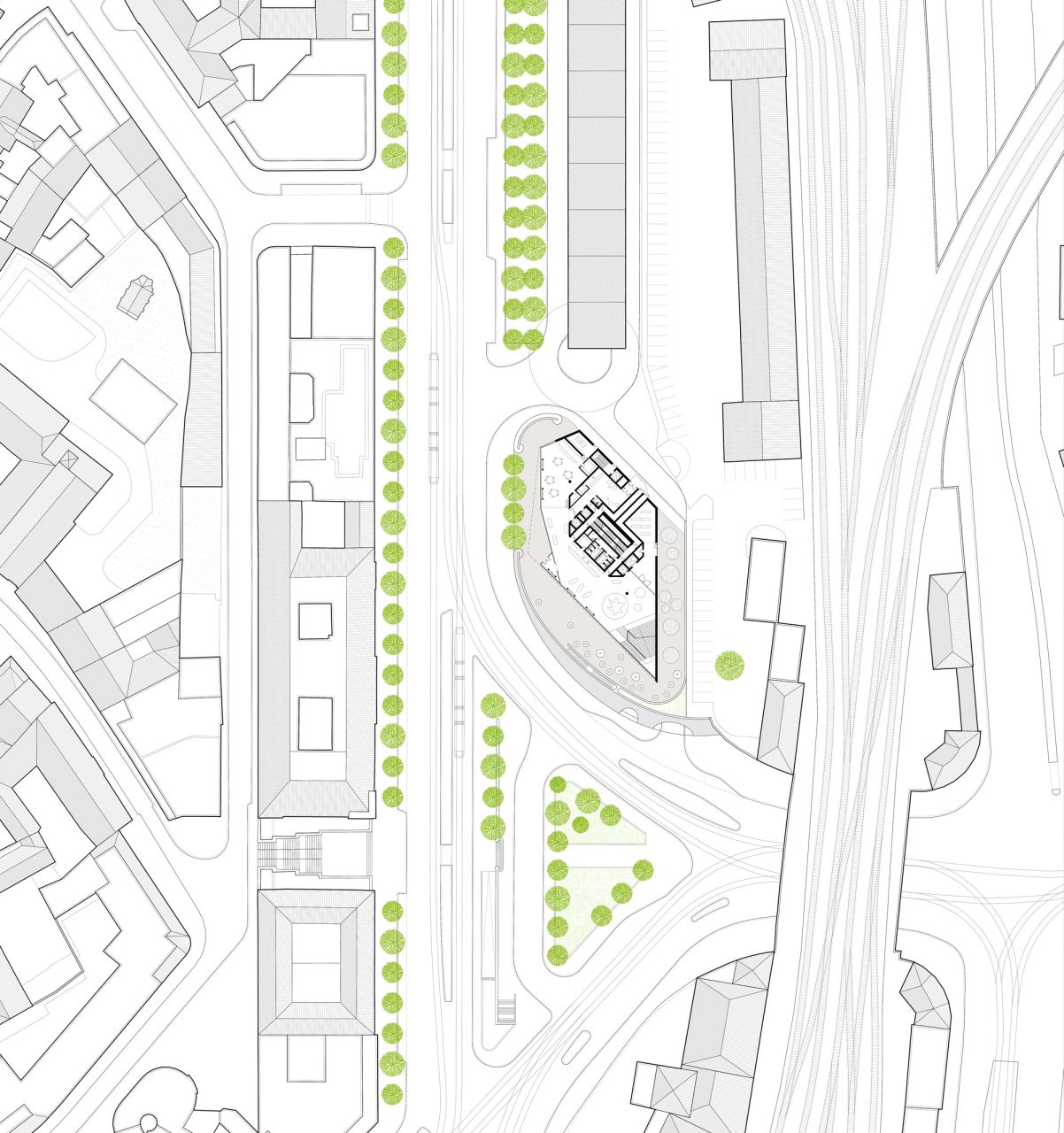 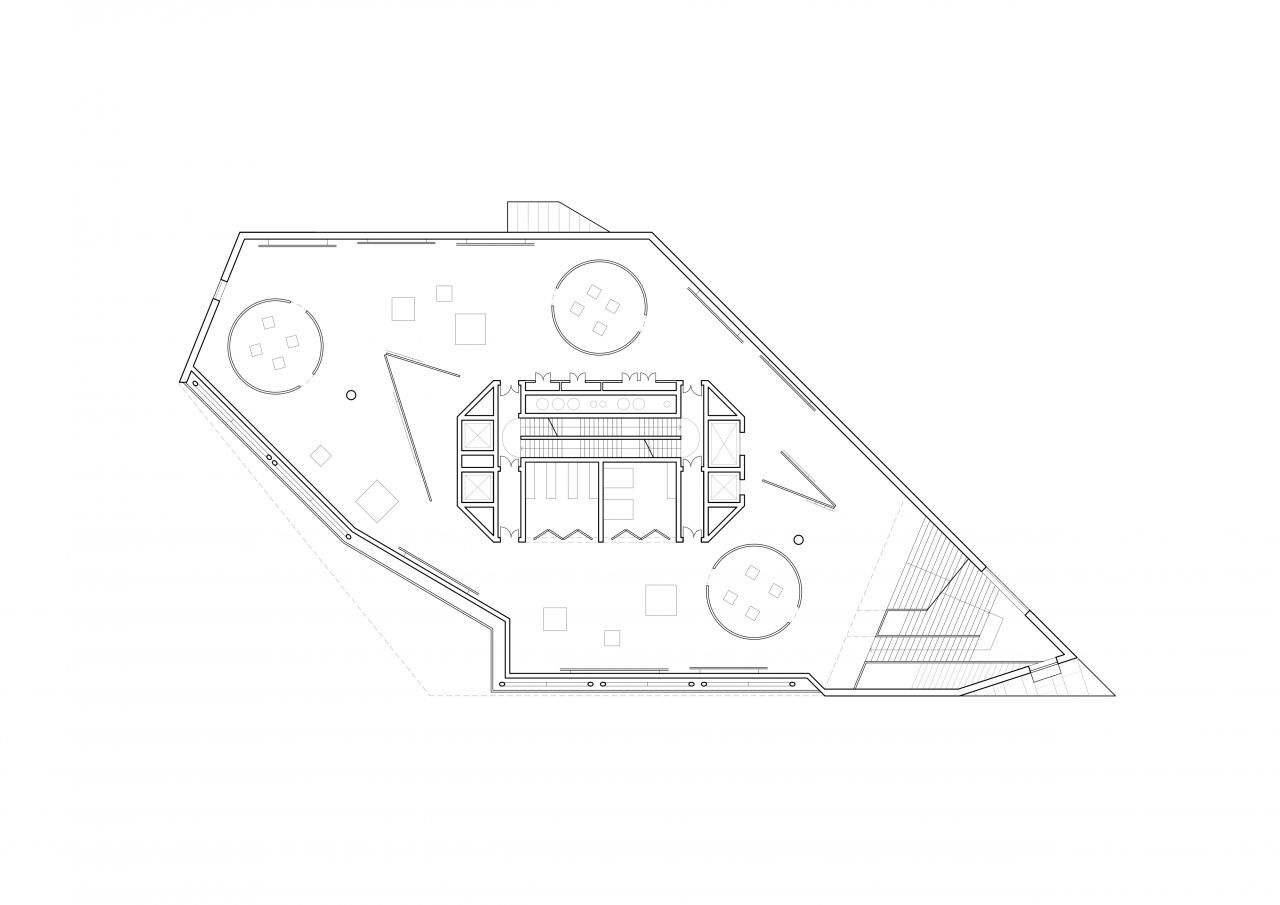 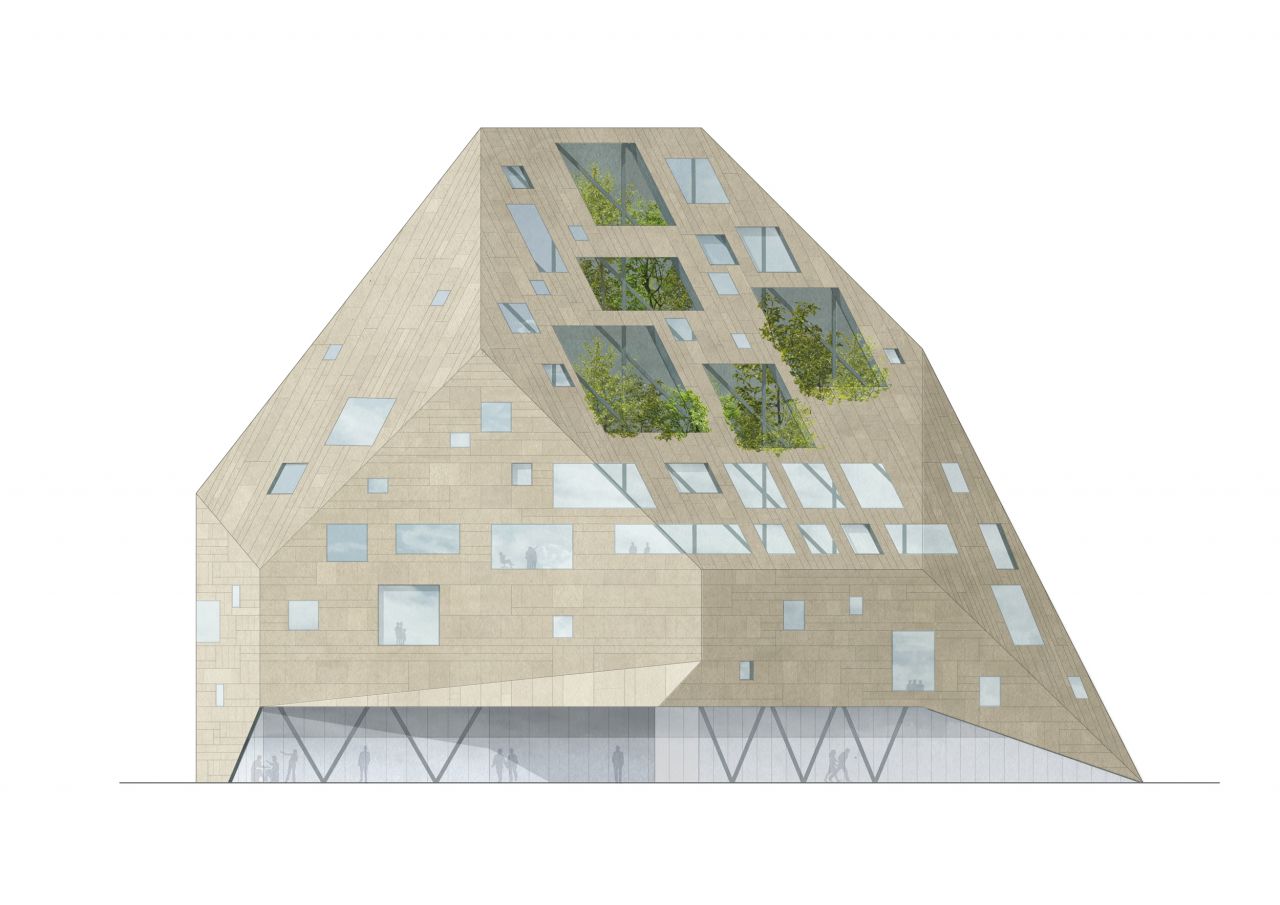 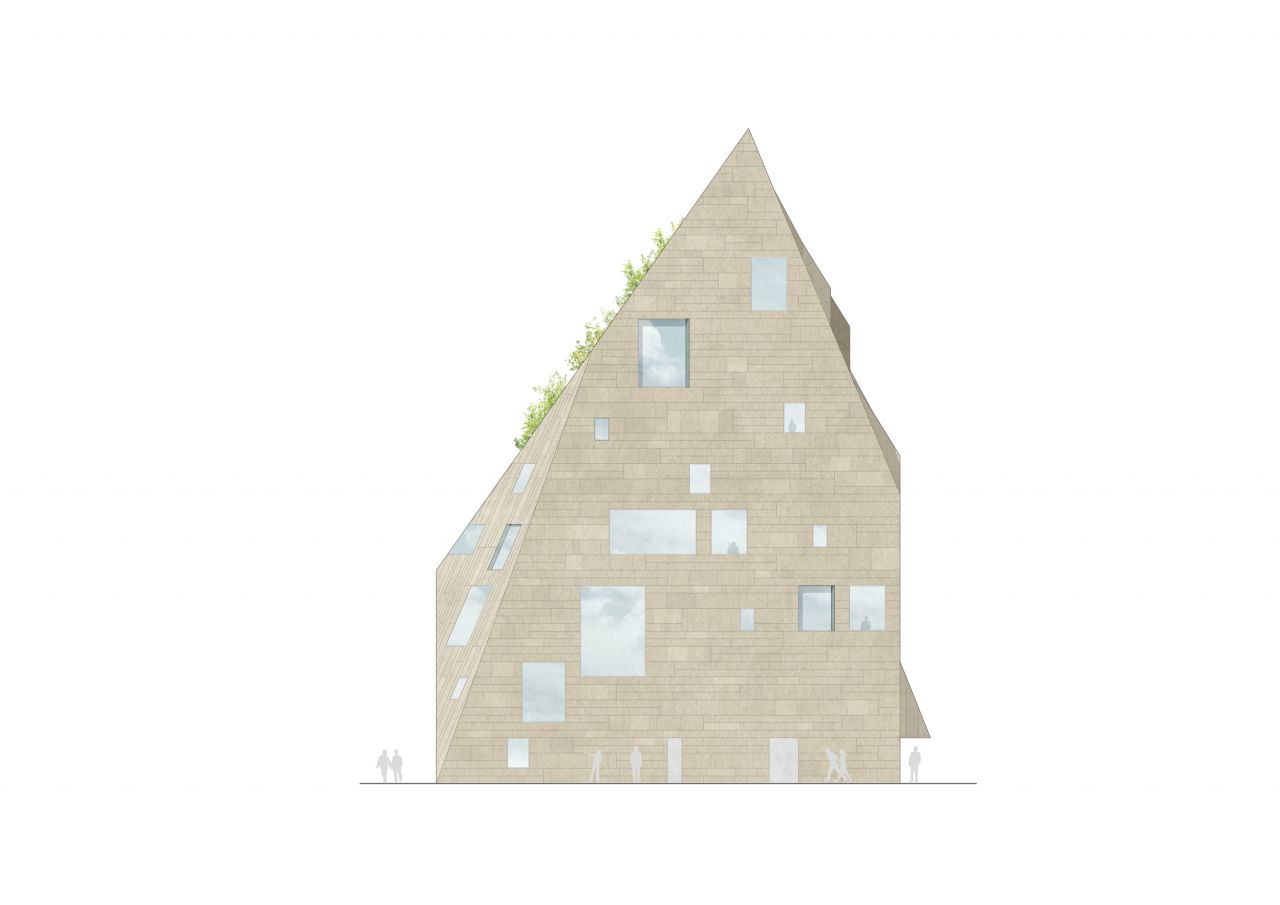 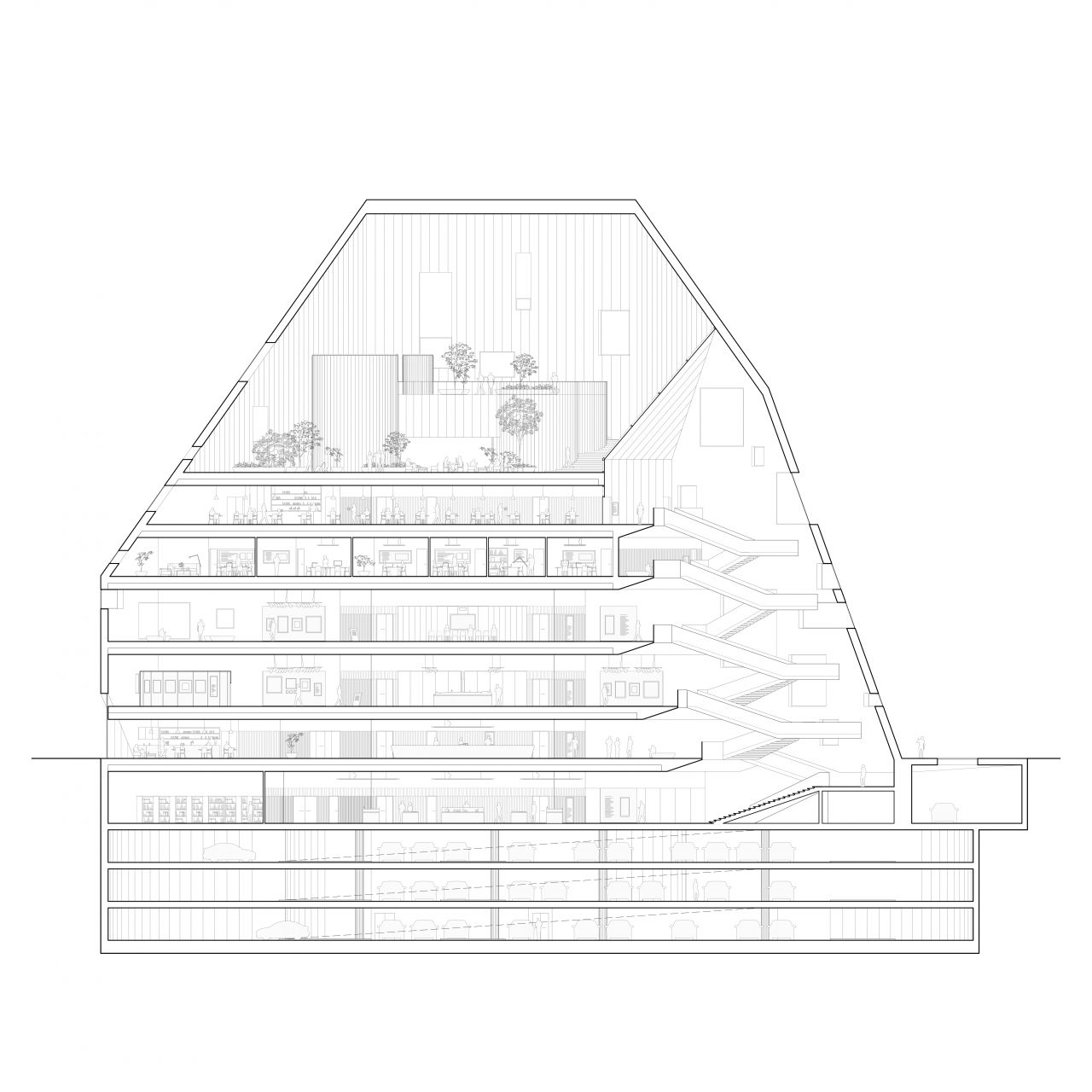 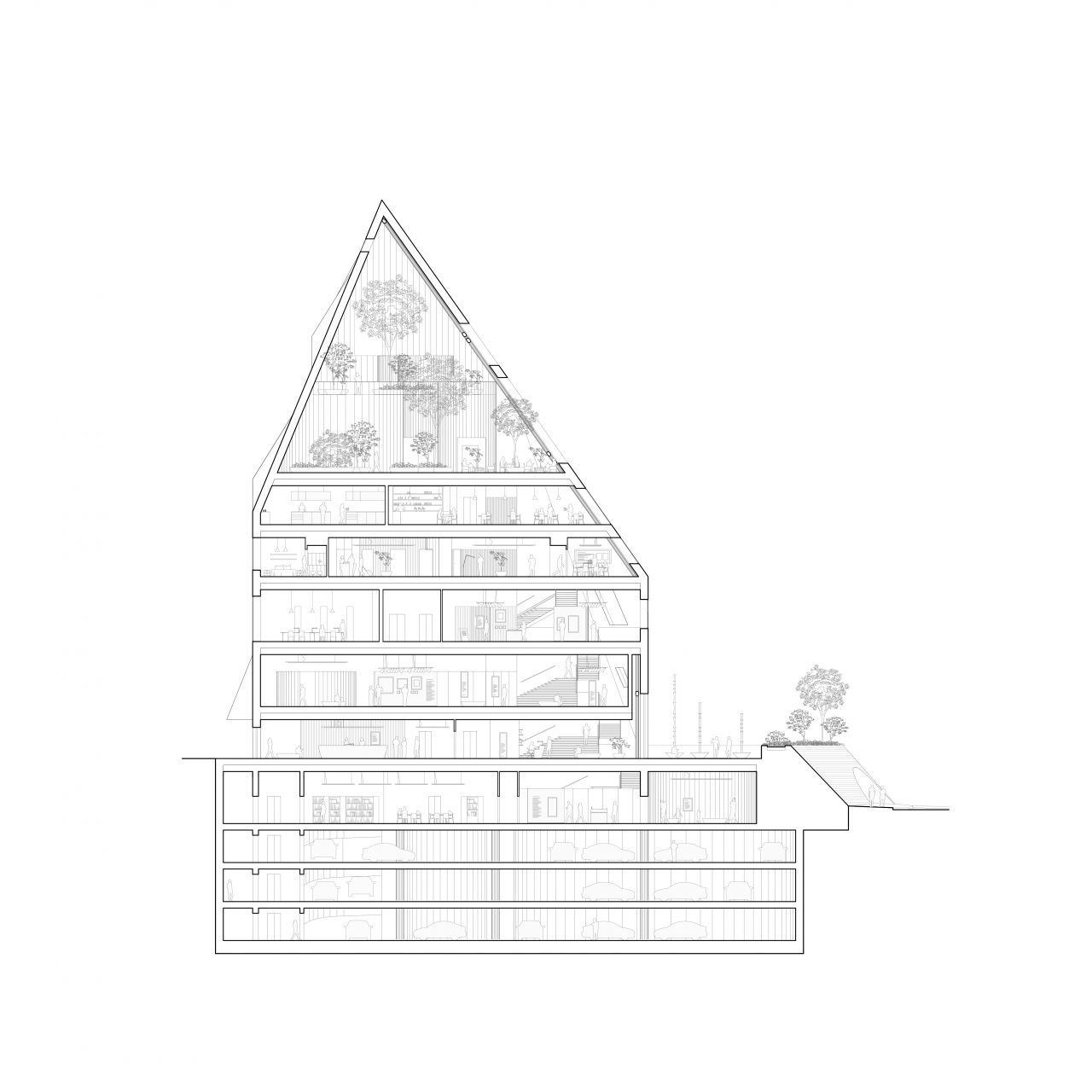 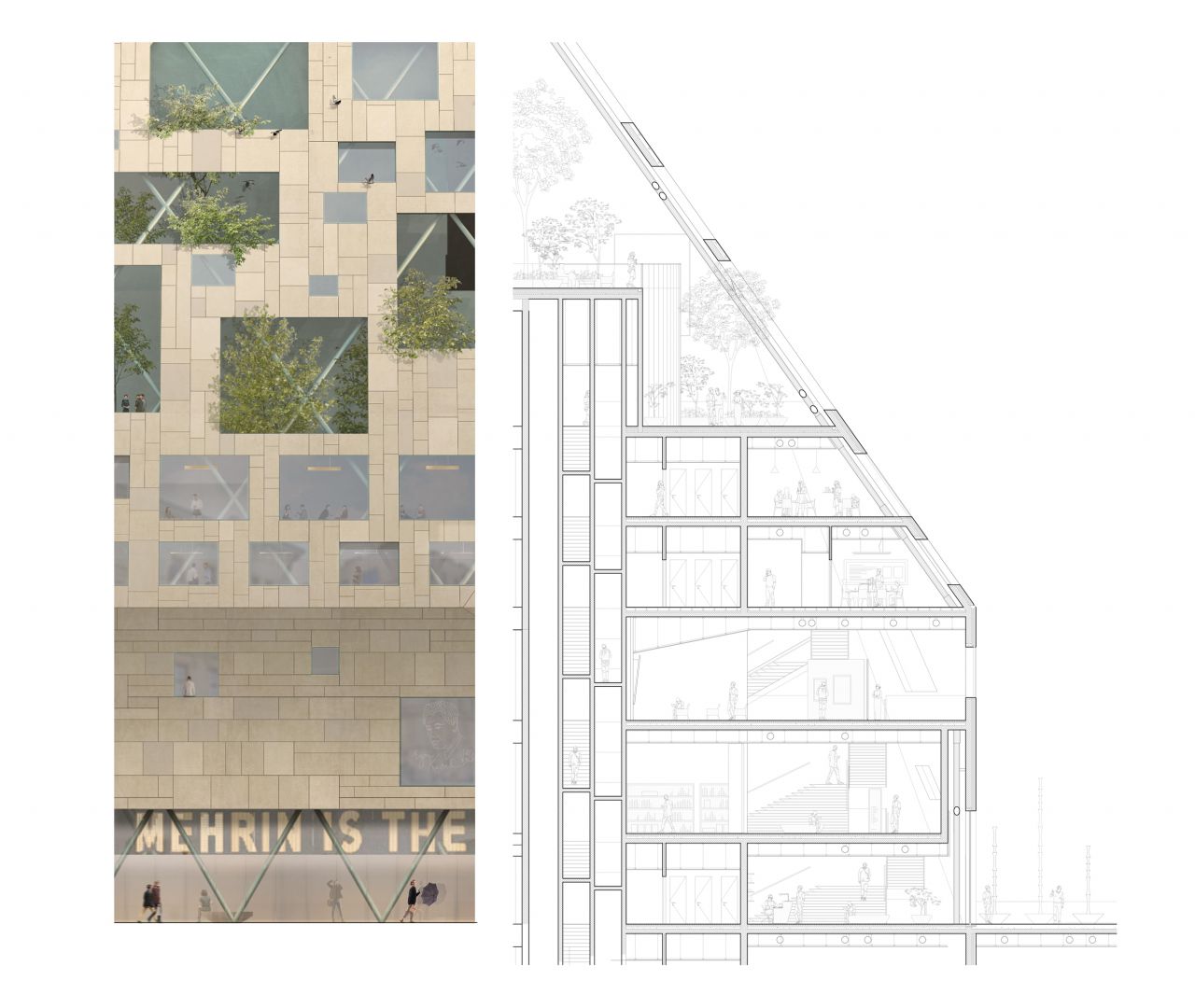