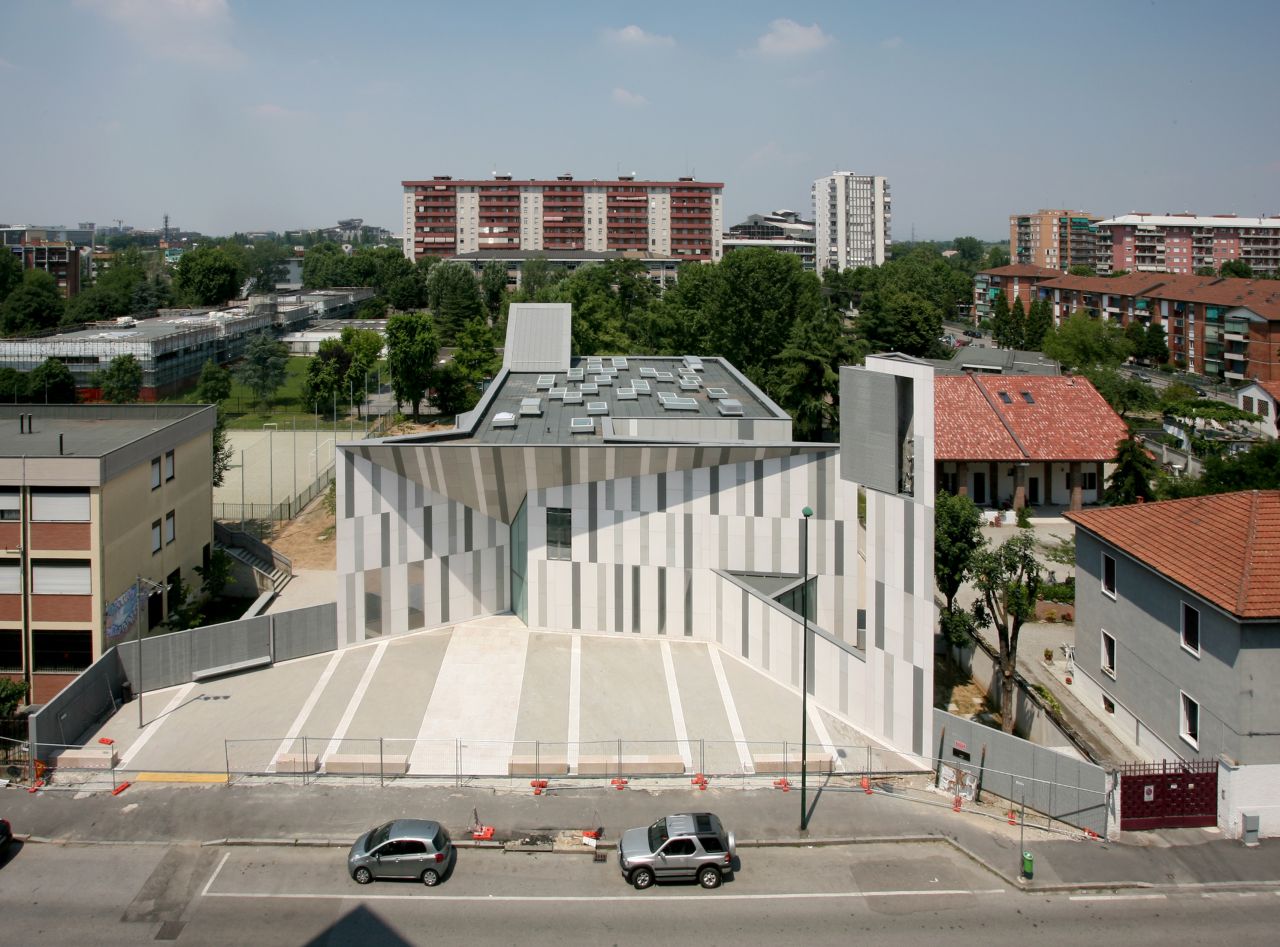 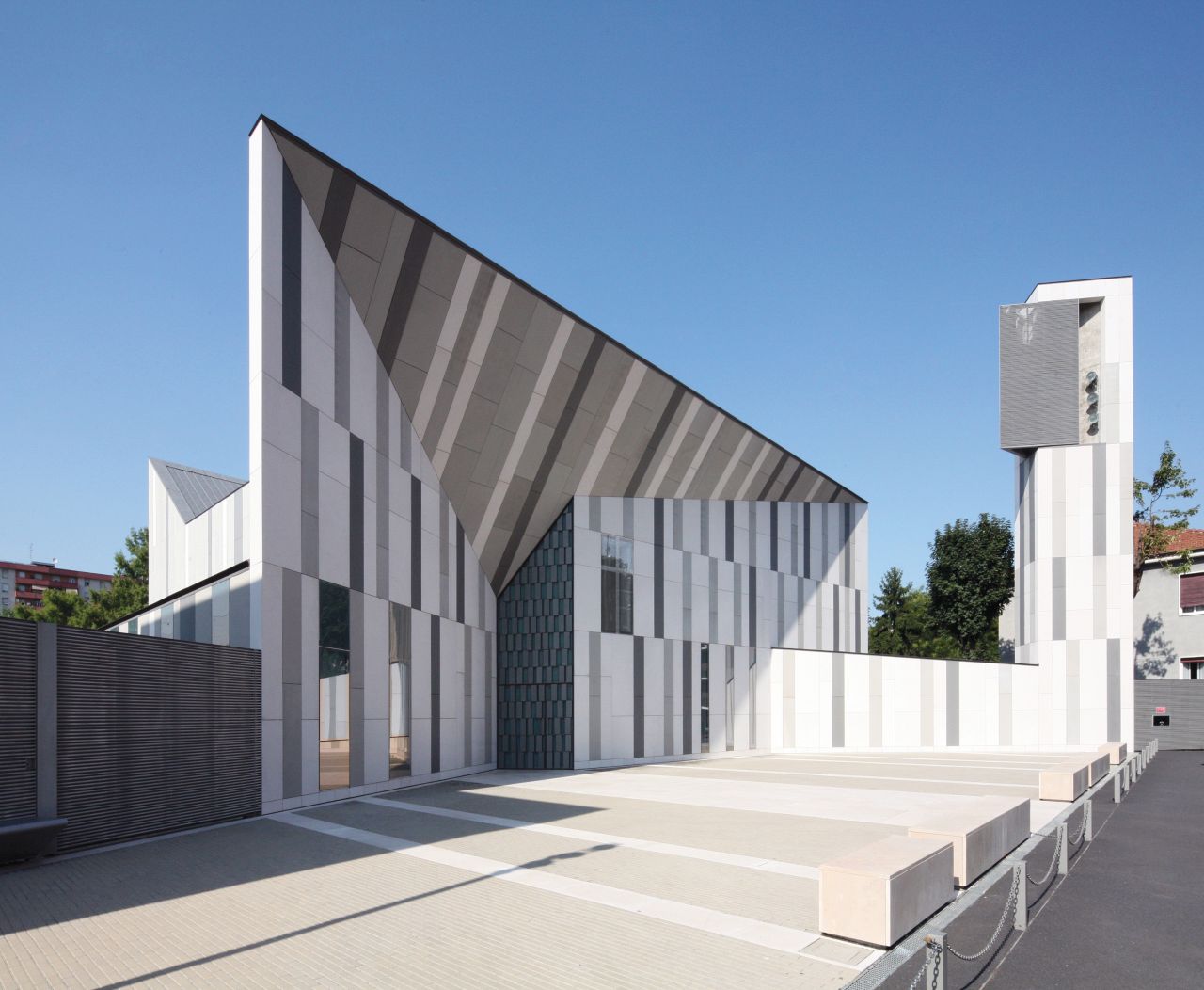 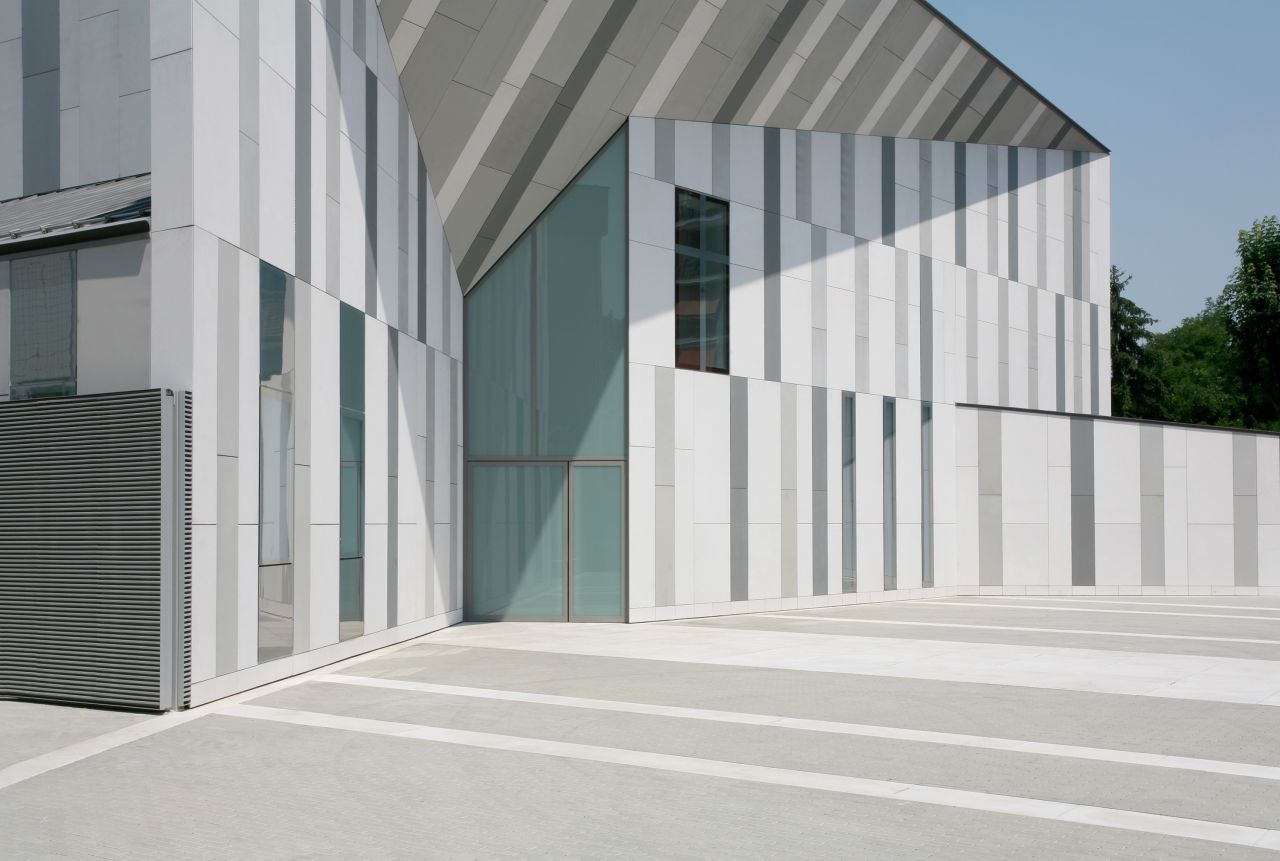 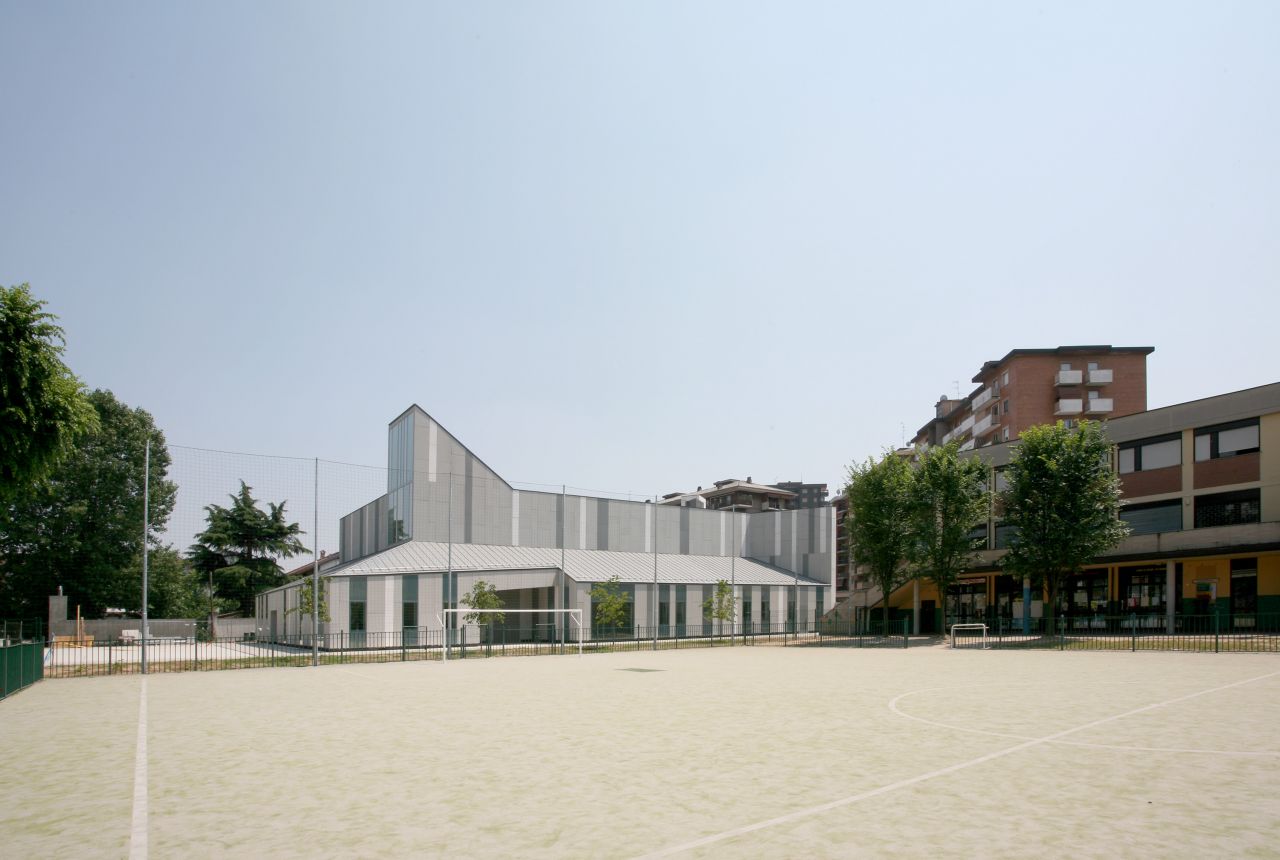 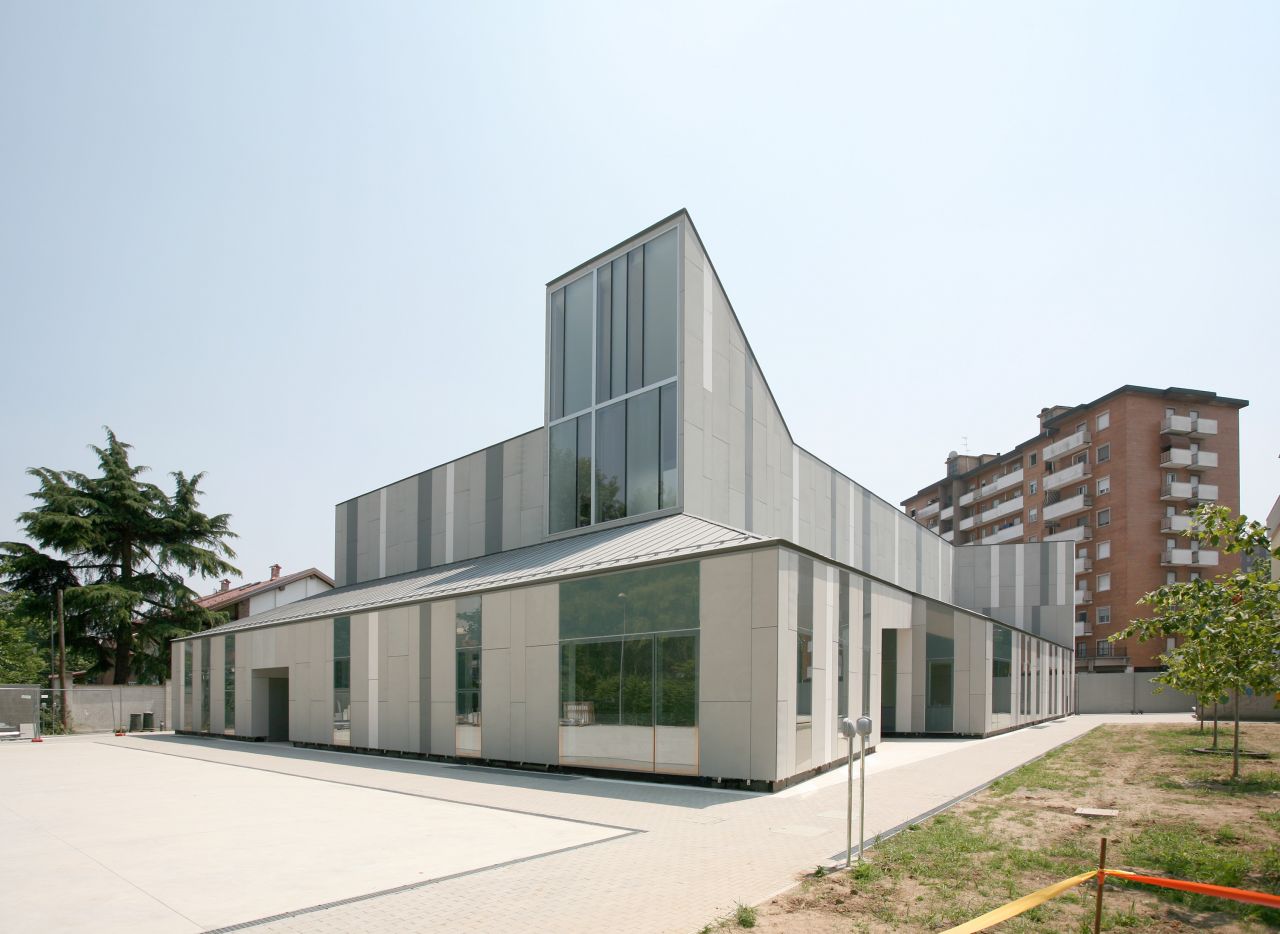 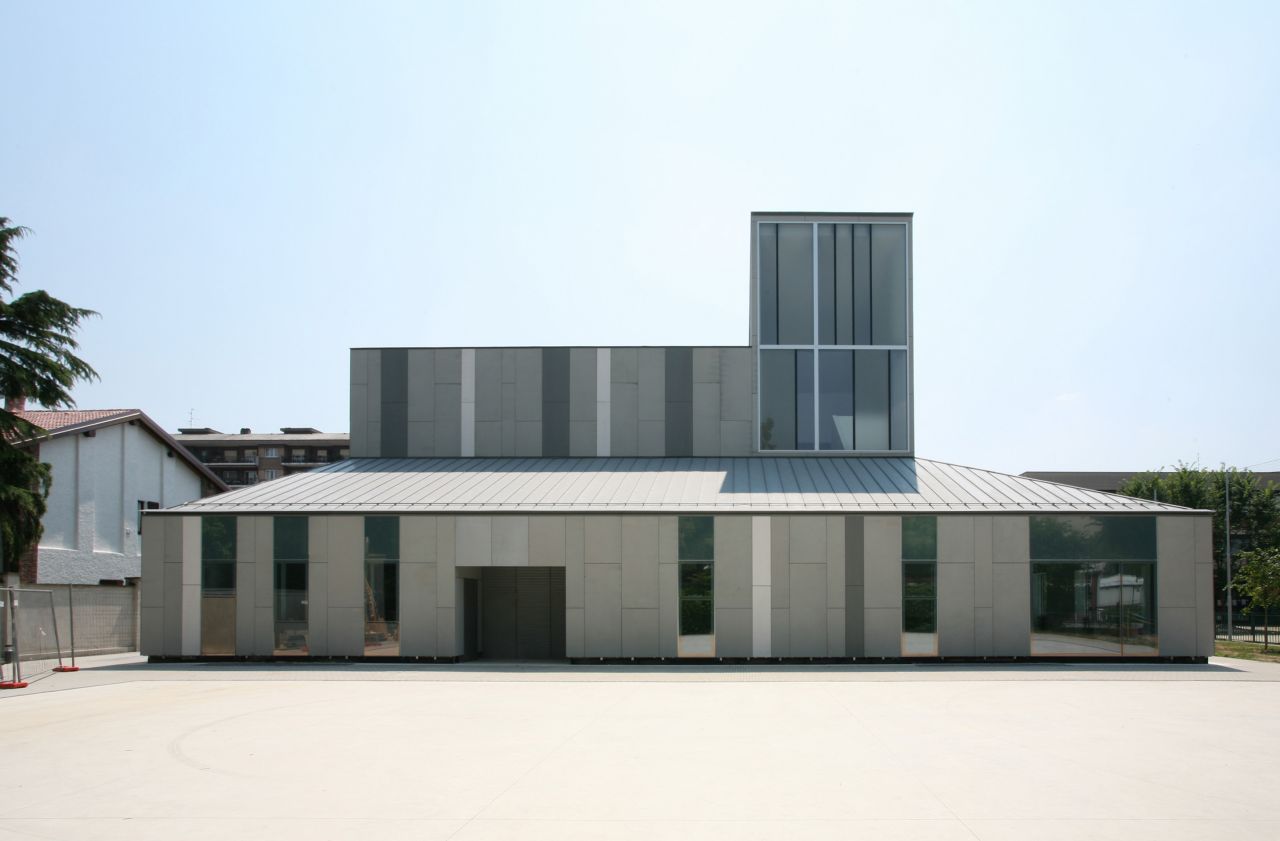 The concave profile of the façade, the bell tower sheltering the house behind, the gate-bench connecting it to the existing parish center, and the pavement of the churchyard form a collective space between the vital dimension of the road and the more intimate sacred space, recalling the active presence of liturgical buildings in Italian building fabrics.

The context (an industrial suburb of Milan) and the existing building to be replaced (a warehouse converted church-hall built by a group of worker priest in the 1960s) generated a formally restrained project, which tackles the difficult subject of a contemporary house of worship without indulging in structural exhibitionism or in the search for figurative freedom.

The specifications requested by the competition brief and the limitations imposed by the existing building and open spaces led to the configuration of a necessarily compact spatial solution, which had to respect its site.

The volume of the church and of the adjacent rooms is hollowed out in such a way as to create a covered reception area for the community towards the street to the south and on the west towards the hedges that line the football field. The existing sports field around the back retains its shape and size.

The front onto Via Pisa perfectly reflects the long tradition of “sail-style” facades, from the seventeenth century façade of Juan Caramuel’s church in Vigevano (author of the renowned “Arquitectura civil recta y obliqua”) to Gio Ponti’s church in Via Paolo Giovio in Milan. The new front takes the thread of the eaves of the nearby oratory; the concave angle between the two sides creates a sheltered area above the entrance and gives shape to the new churchyard space.

Surrounding the main volume of the church-hall a lower body covered with a pitched roof houses the spaces destined to the social life of the parish complex: priest’s offices, meeting rooms, the sacristy and the atrium to a large underground event room in correspondence to the liturgical hall.

If the general layout of the spaces is entirely traditional, an accurate determination of areas of relevance, the proportions of the rooms, lighting, the simple design of the liturgical space and furnishings express the search for a welcoming space for a contemporary Christian community, where contemplation and activity in the world, daily life and a sense of the sacred are not separate moments, but aspects of a unified feeling. The layout of the new environments which form the parish complex aims to maximise their relationship with its open spaces, opening them up to moments of togetherness which constitute a key element of its life.

In their many variations these two spatial forms are often combined in many historical examples, from the Pazzi Chapel by Brunelleschi, S. Andrea on the Via Flaminia by Vignola – where a circular or elliptical dome is set on a simple rectangular volume – up to several late baroque examples by Guarini. The architecture of the interior resonates also with two opposite figurative matrices: the Franciscan and Dominican churches, undecorated halls with exposed roof structures, and the enveloping domes of the frescoed churches of the counter-Reformation.Between the churchyard and the interior hall there is a lower transverse space, which serves as a vestibule as well as being the home of the baptismal font, whose location opposite to the altar harks back to the position it occupied in ancient times.

The outer facades are faced with an array of vertical slabs of equal dimension but different materials: white Trani stone, Grey Serena stone, oxidized zinc sheets, silkscreened glass. Their rhythm, position and quantity changes according to sun orientation, quality of internal spaces and relationship with the urban setting, generating a bi-dimensional decorative pattern which acts as a finer texture in respect to the bolder volumetric statement. 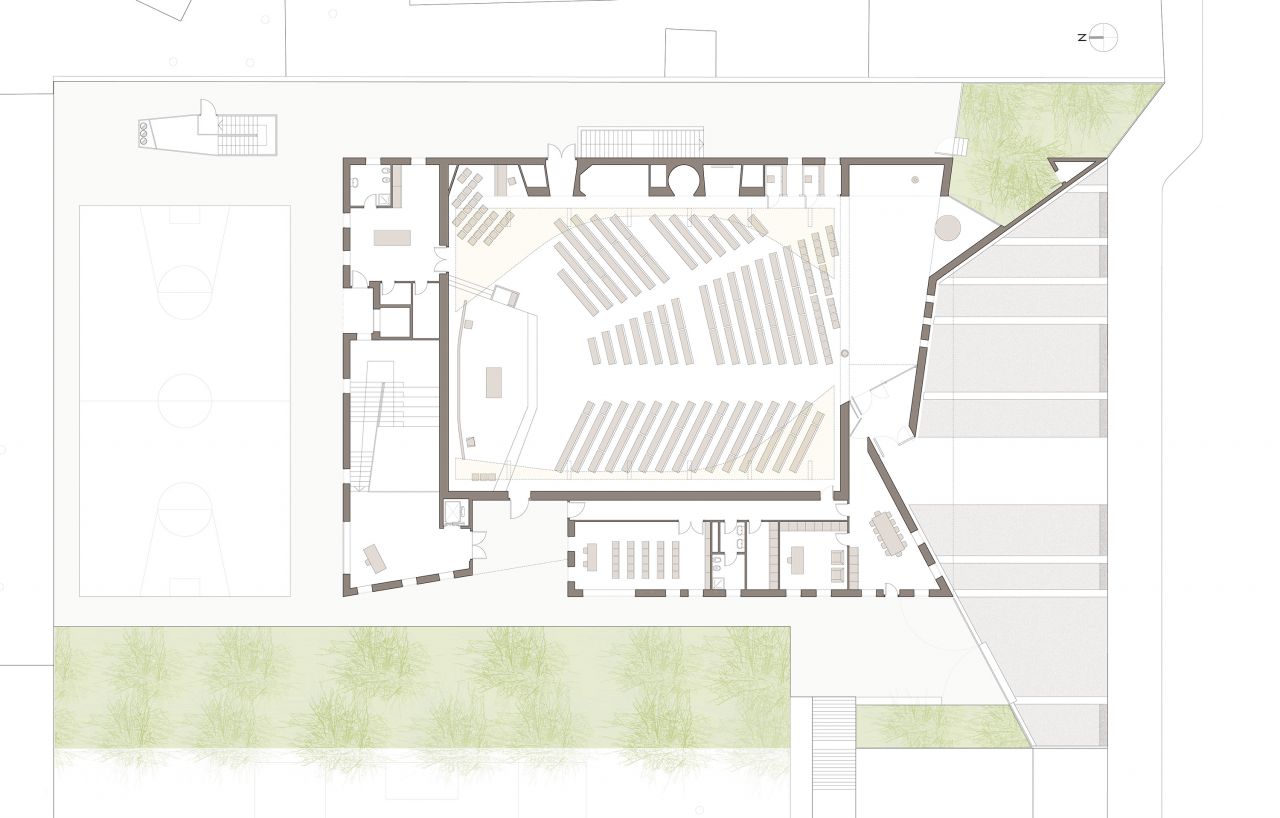 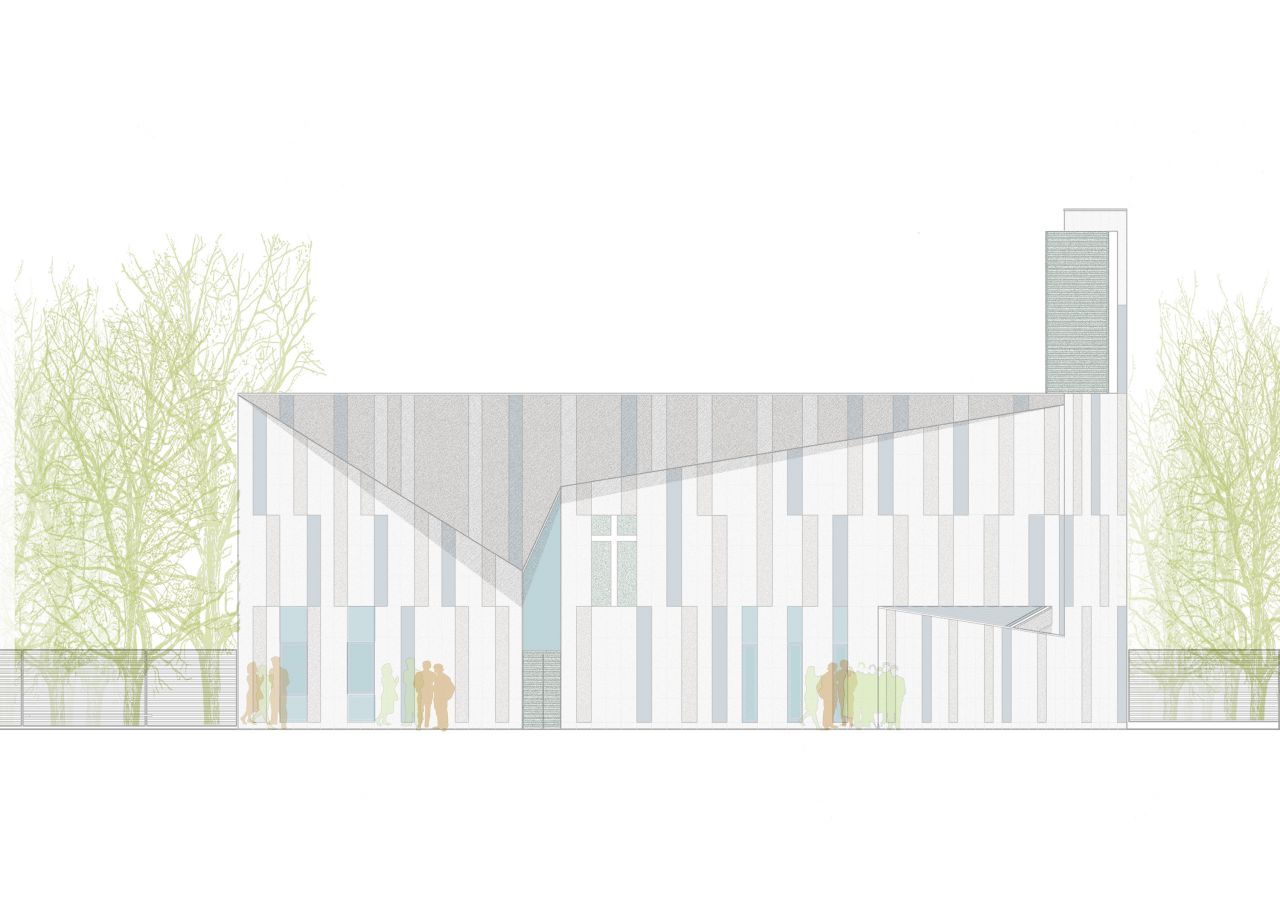 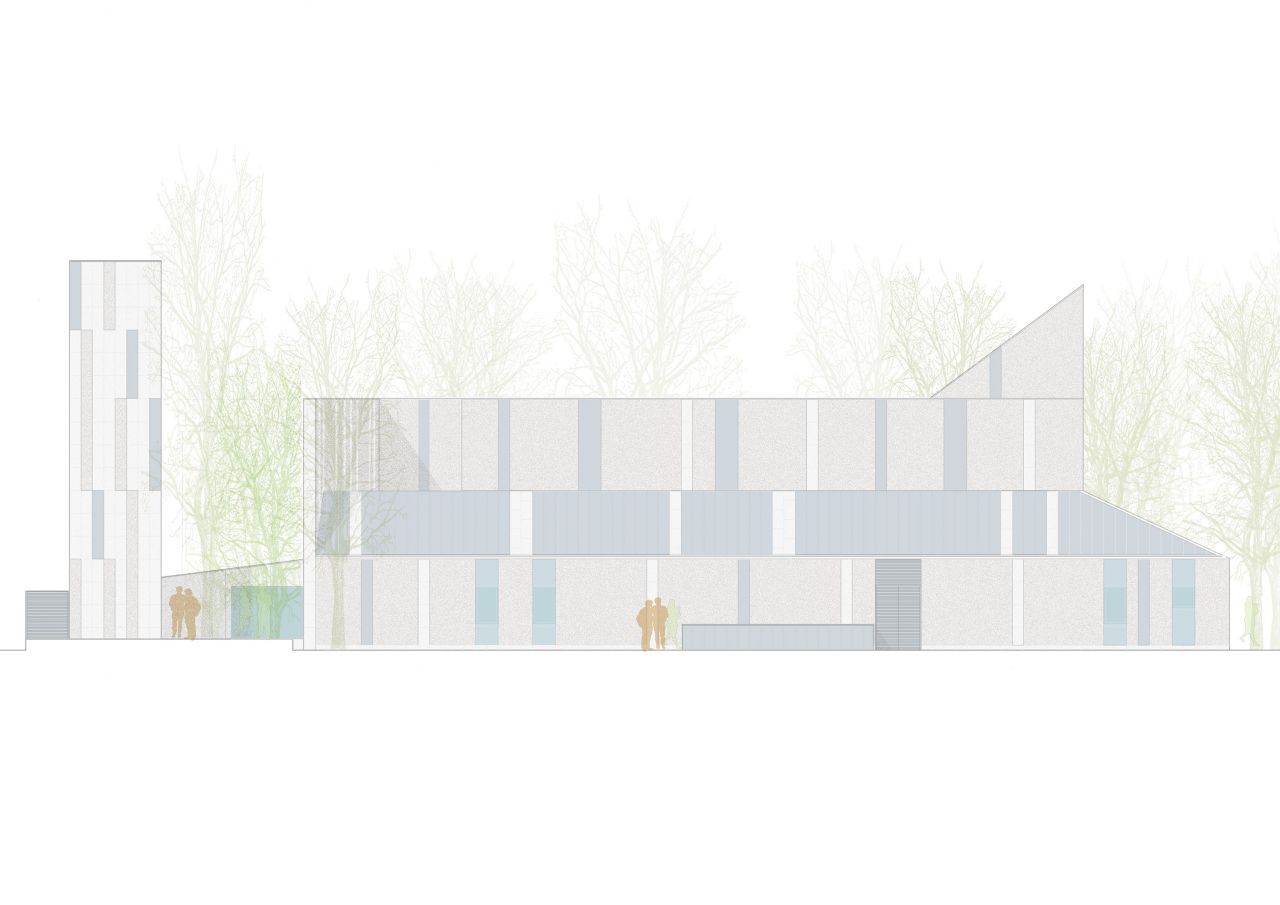 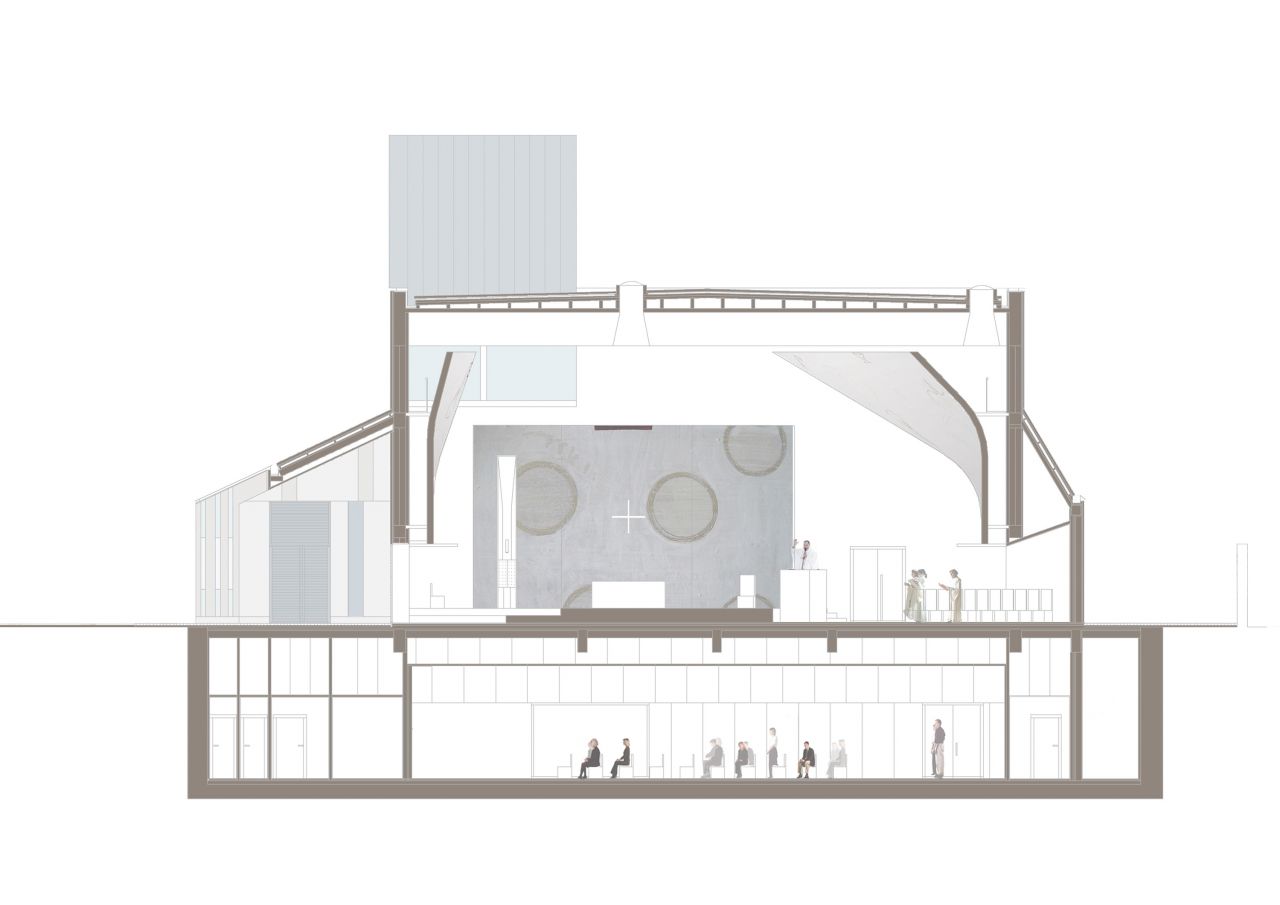 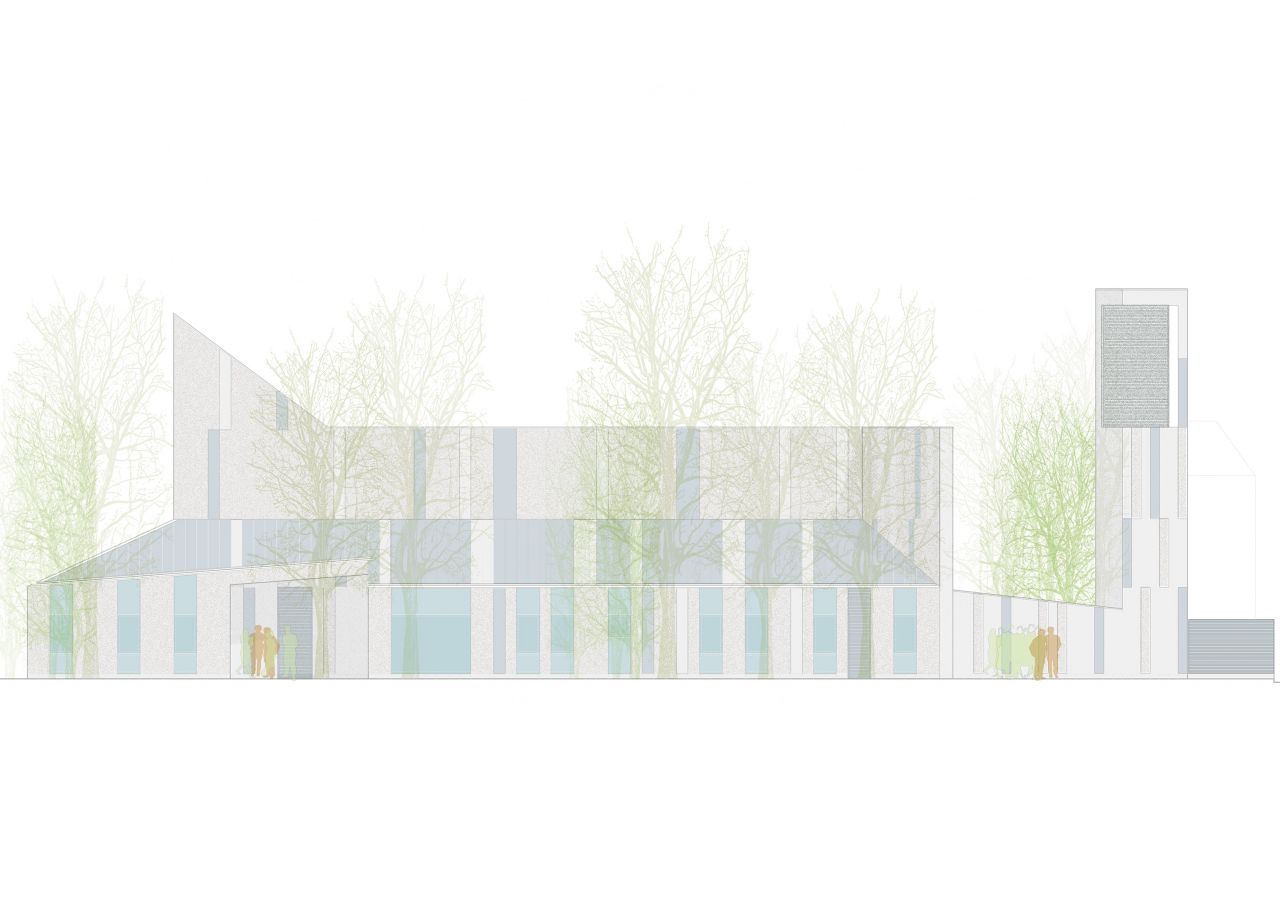 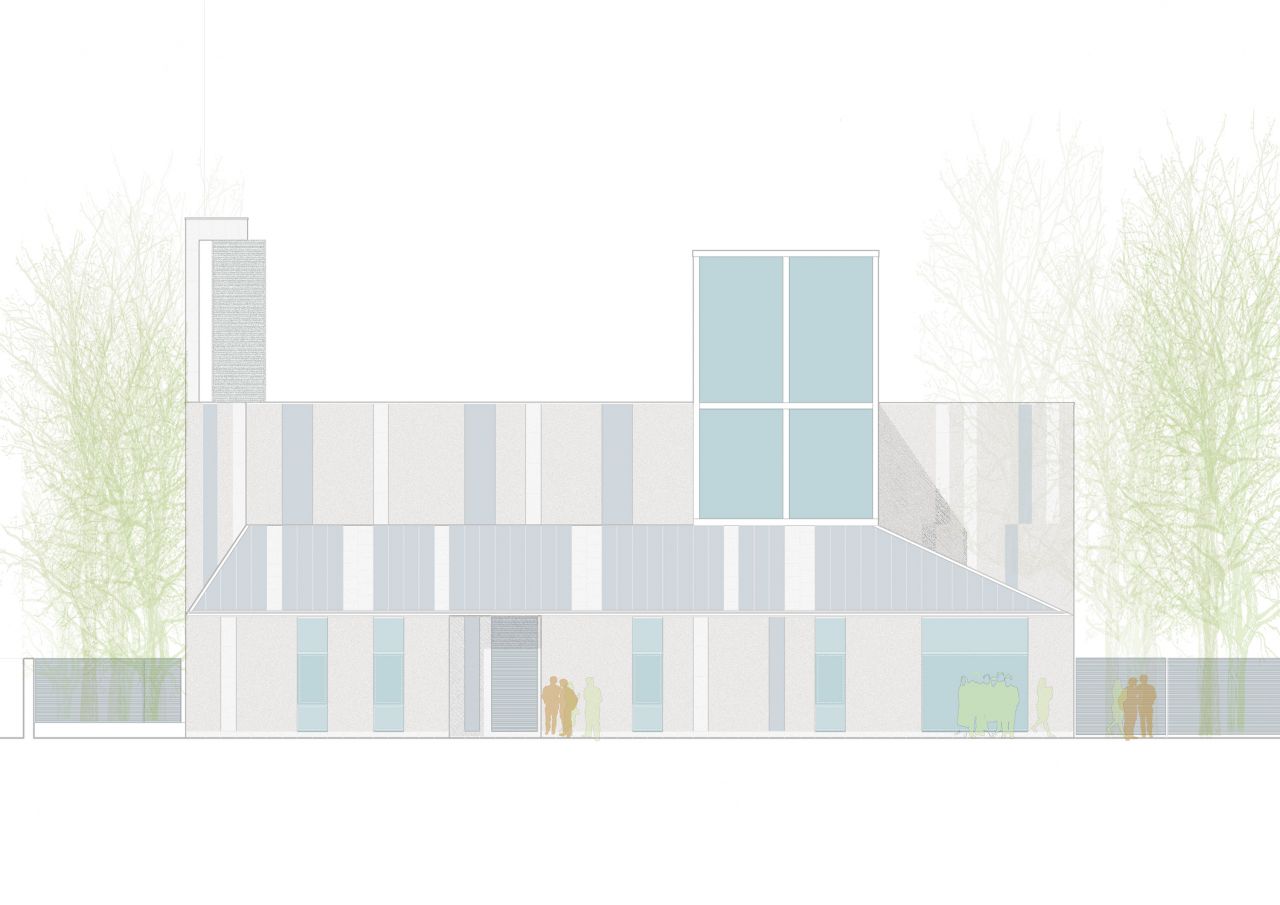