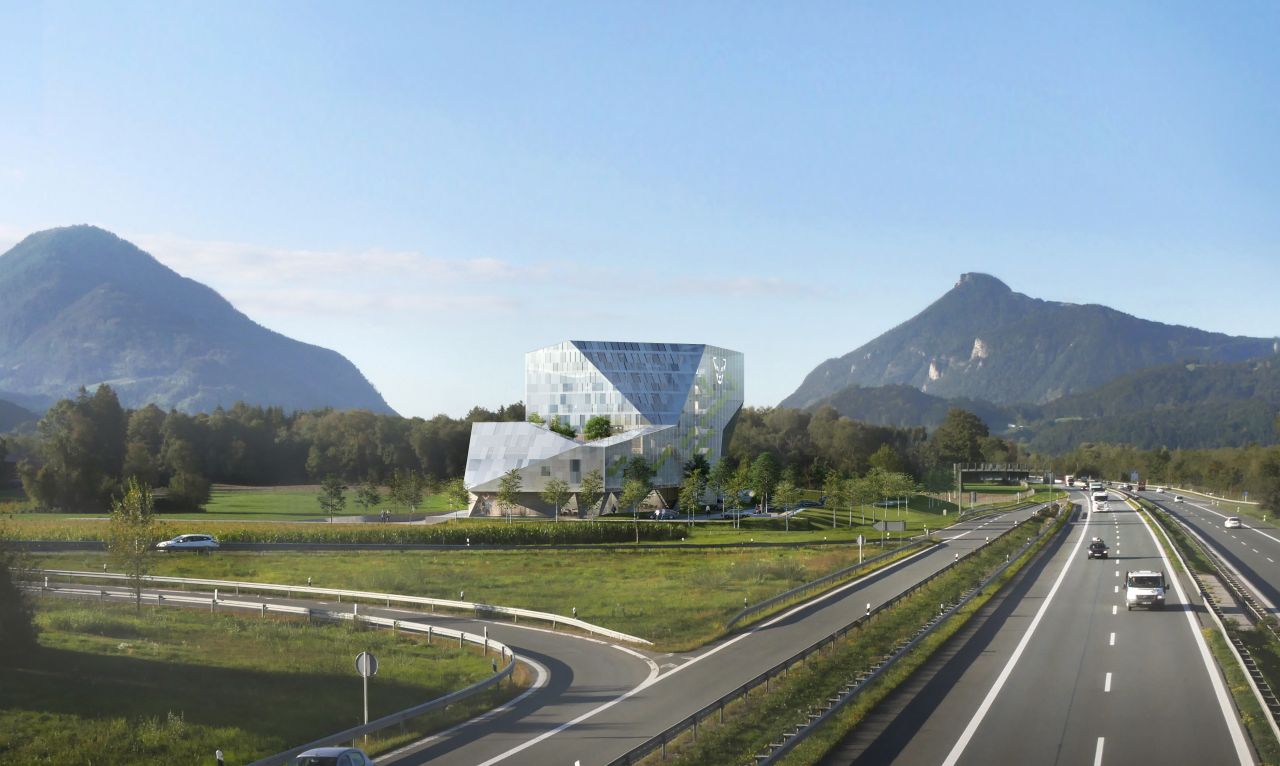 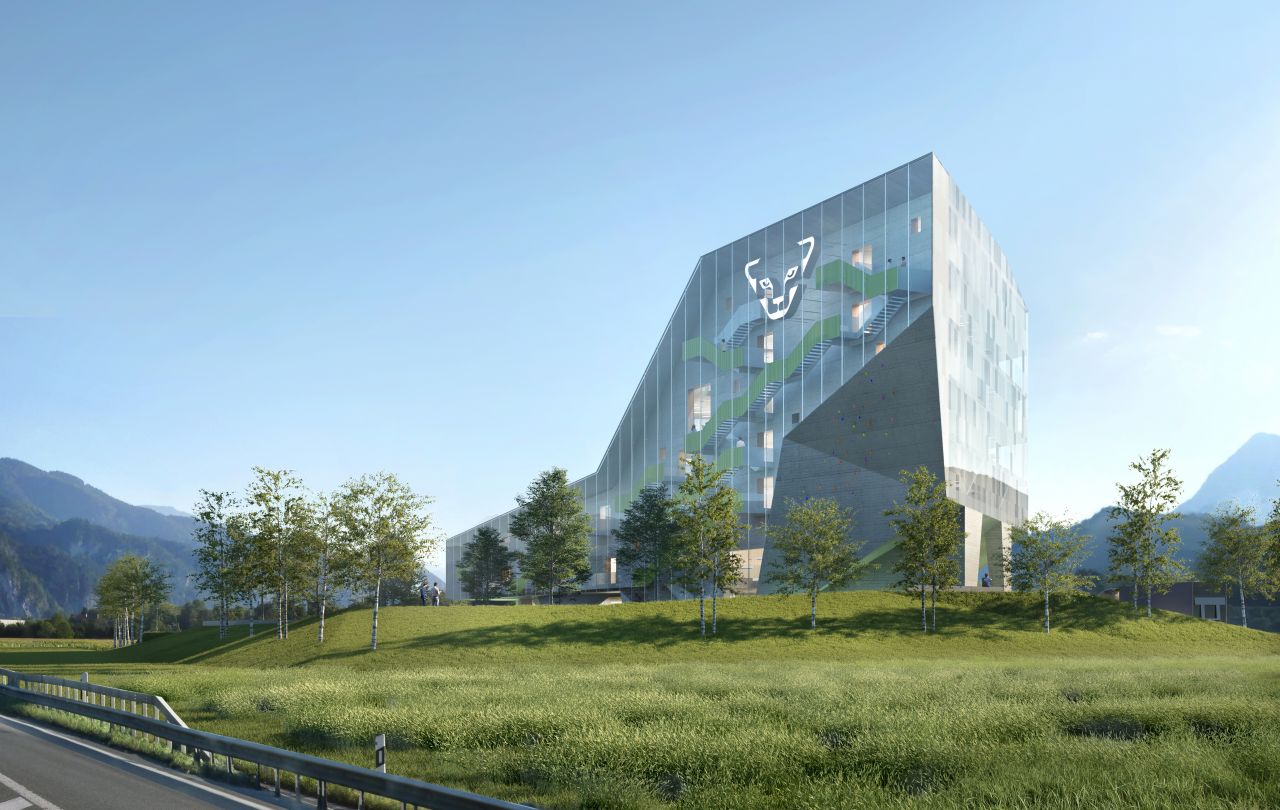 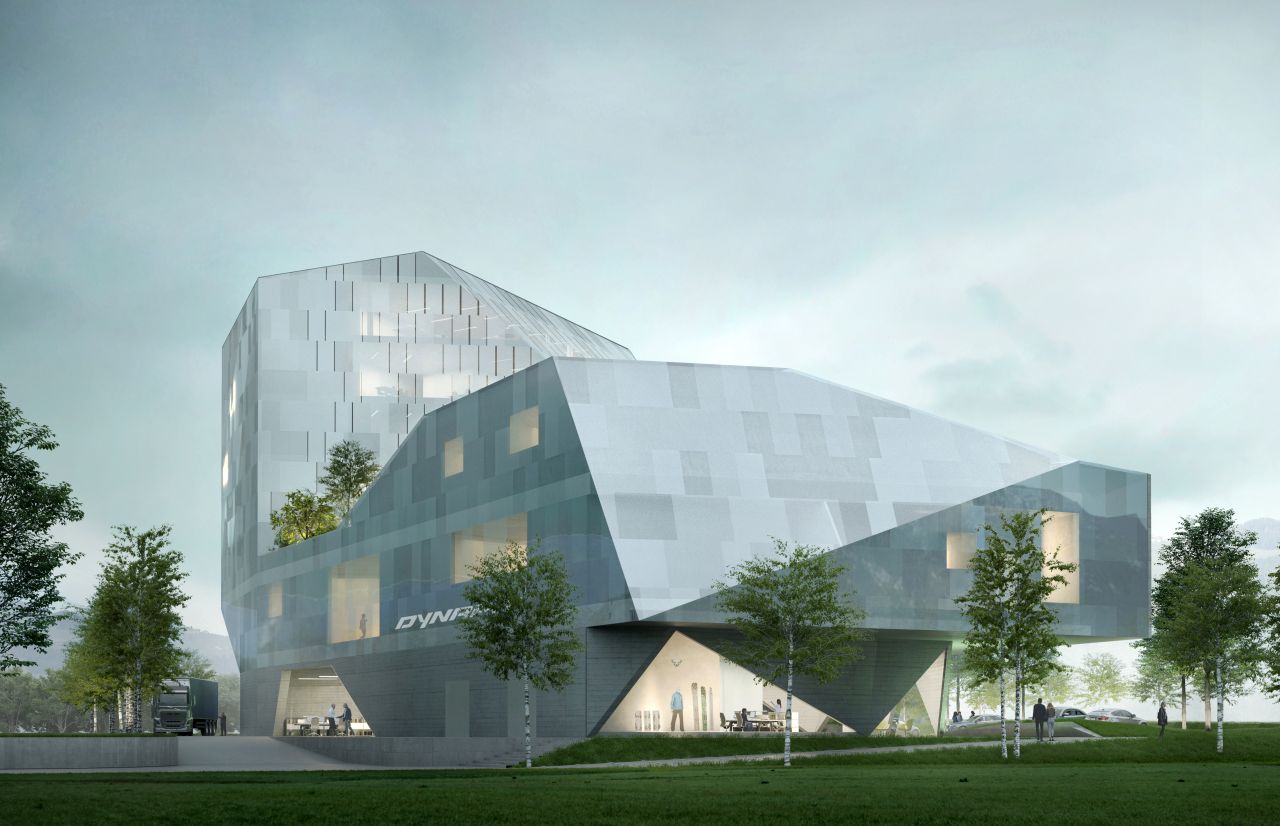 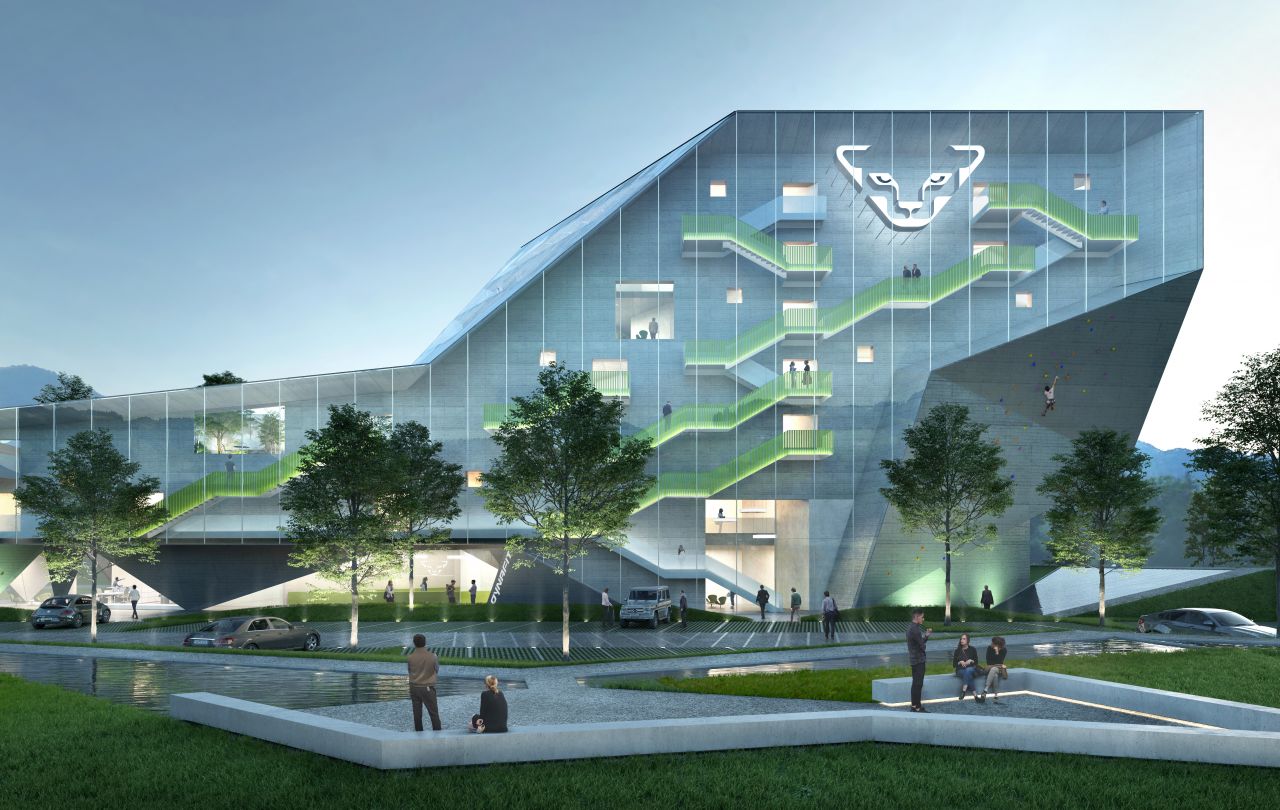 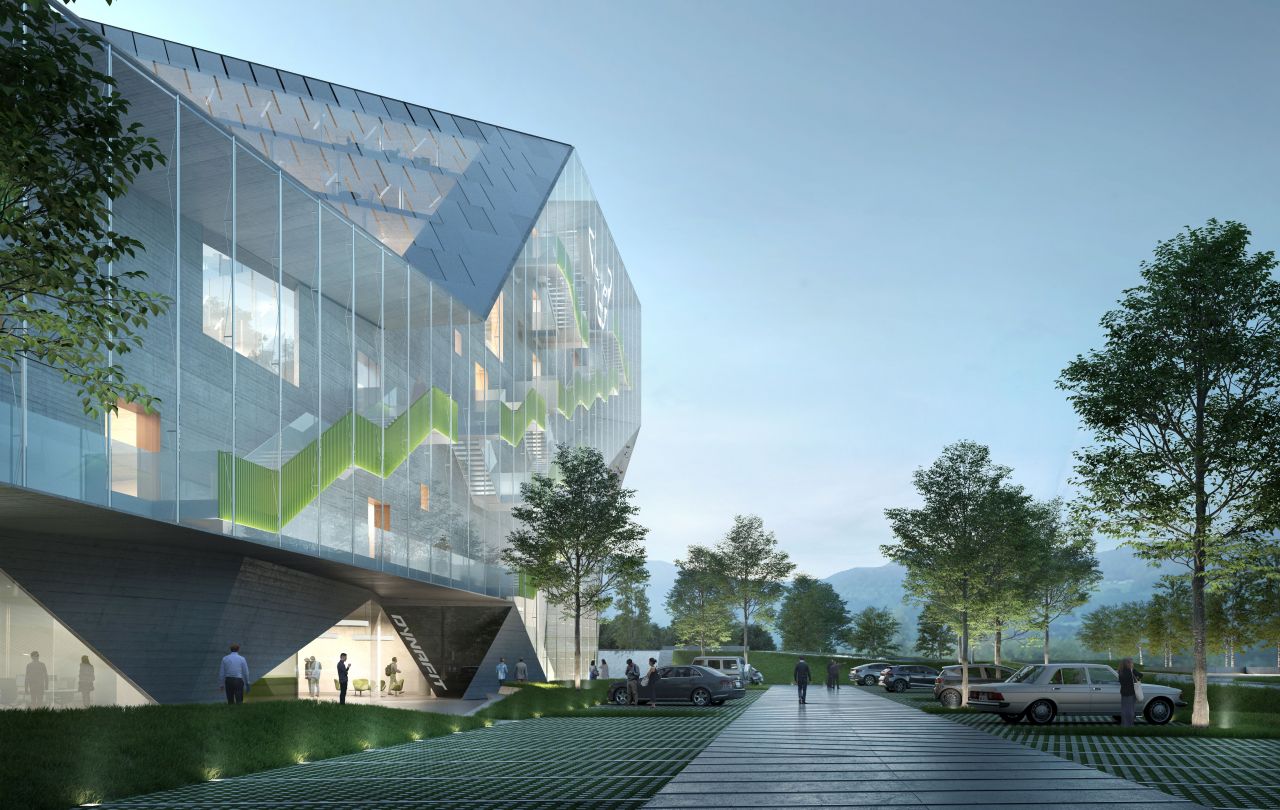 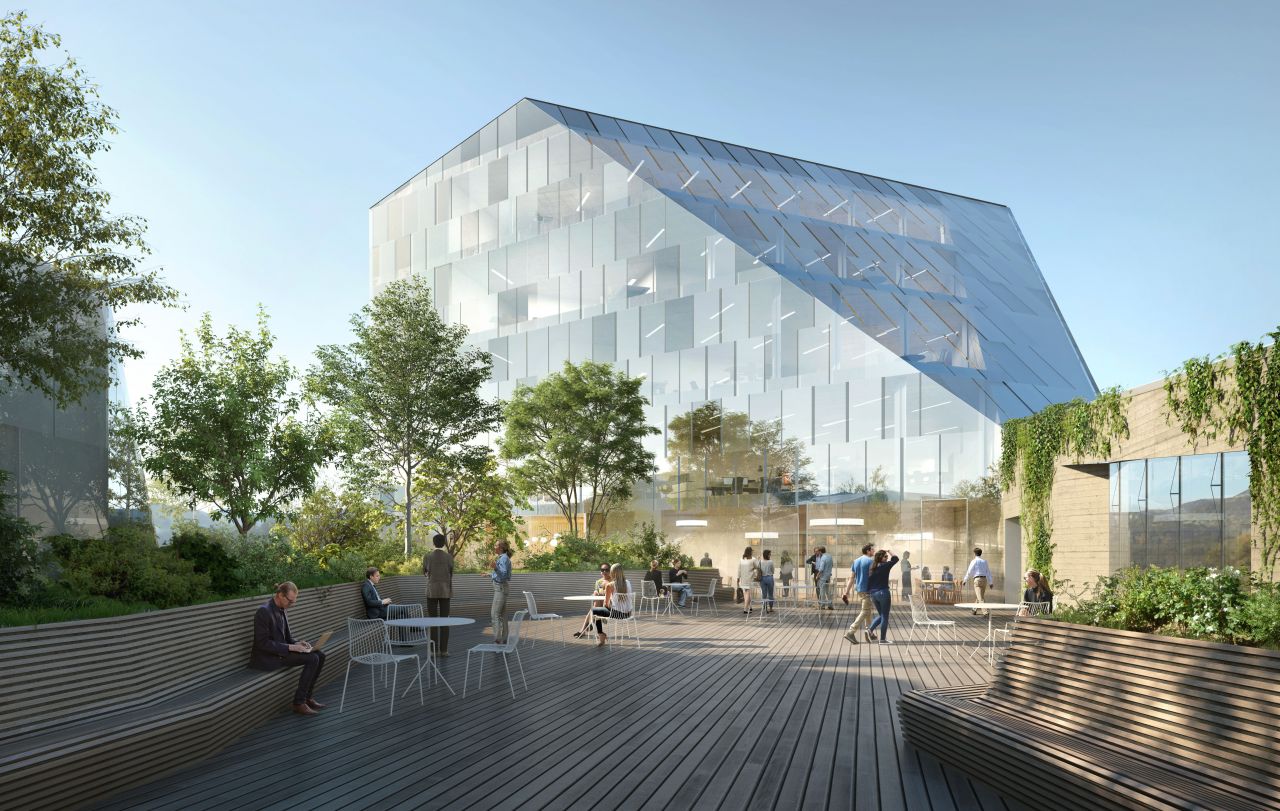 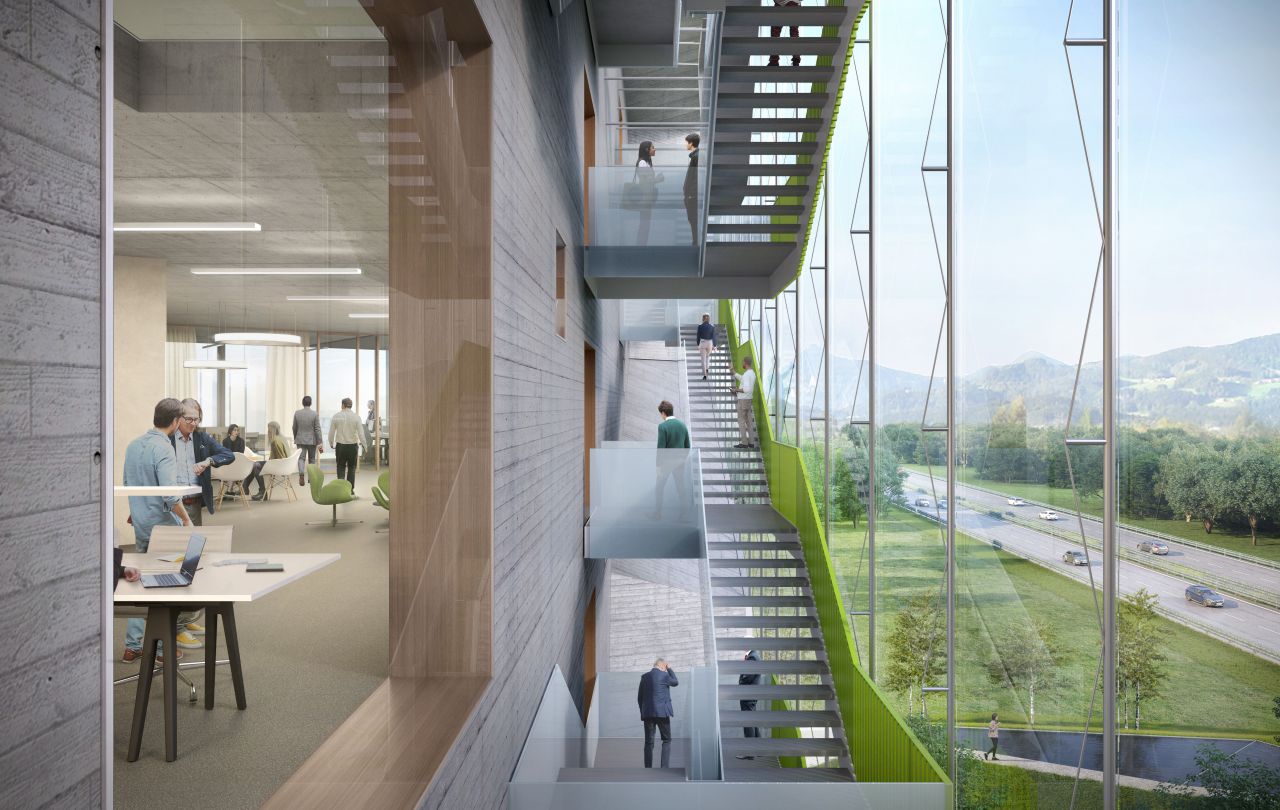 The overall character of the building convincingly embodies and communicates to the public the values and the character of Dynafit and of the wider Oberalp Group and its constellation of brands. This is done not only with a superficial Reklame image, but rather with the inclusion in all the parts of the new building of the spirit which animates the perceived excellence and performance of its products.

The backbone of the territory around Kiefersfelden is constituted by the interlace between three strong geographical features, one natural – the course of the Inn river, which in this point crosses the border between Austria and Germany – and two man-made ones – the E60/A12/93 highway and the train line, both running along the river valley. In this point, the landscape of the Alps gently steps down to the hills around Rosenheim and the mountain forests fade into the agricultural landscape of the plains. This geographical unity partially coincides with the productive tradition of the area, which constitutes one of the biggest European districts concerned with the transformation of wood.

The planned Dynafit headquarters will profit from all the peculiarities of this district, strongly tied to the Alps and their layered culture interlacing traditional alpine economies, the new forms of summer and winter tourism, a widespread attention to the environment and a strong interconnection with the European dimension thanks to its major traffic “corridor”. 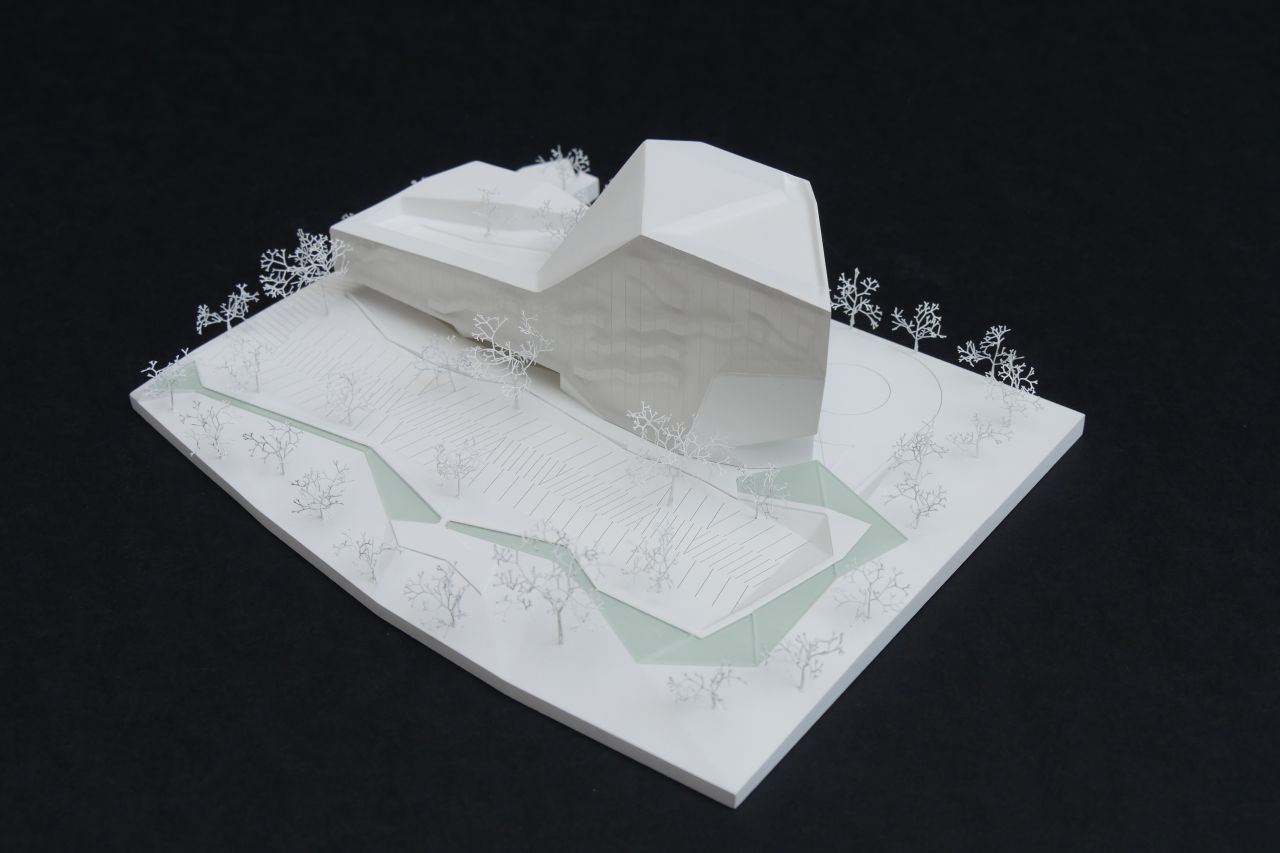 The new proposed building has to perform with maximum ease two complementary tasks: to create comfortable, welcoming spaces to host the different functions of the given program, and ease the cross relationships among them; and to generate a new landmark, capable of embodying in a synthetic and convincing way the company’s engagement to the wider public. The new building will represent the articulation between the peculiar conditions of Kiefersfelden’s urban structure, the Inn valley and the highway, the rocky mountain landscape on the South and the gentle hilly one on the North; but it will also function as a “declaration of intent” for the wider Dynafit public which will perceive its image from the Inntal Autobahn, by direct visit to its premises, shop, company museum and sport facilities, and trough the virtual communication of its image on the web.

The volumetric conception of the building is rather simple, and harmonizes well the exigencies of the assigned functional program with the constraints and resources of the plot and the views toward the surroundings. Two high floors surmounted by a terrace host all the areas opened to the wider public, the shops, the showrooms, and the fitness area. Over this base, a higher body contains all the different types of offices and their different need of openness. No workspace looks directly on the highway on the east; their outlooks are rather directed toward the South-East and North-West sides marked by long views toward the surrounding landscape. A concrete wall pierced by windows of different sizes regulates the relation between the interior spaces on the different floors and the views over the highway; on its outer side, a light metal stair screened by a large glass curtain constitute both a fire safety escape and an alternative connection between the functions on the different floors. This glass “buffer” is the main outlook of the building toward the Inn river, and constitutes an important contribution to its microclimate and the same time a signal of its presence and activities for the passers-by driving on the highway. 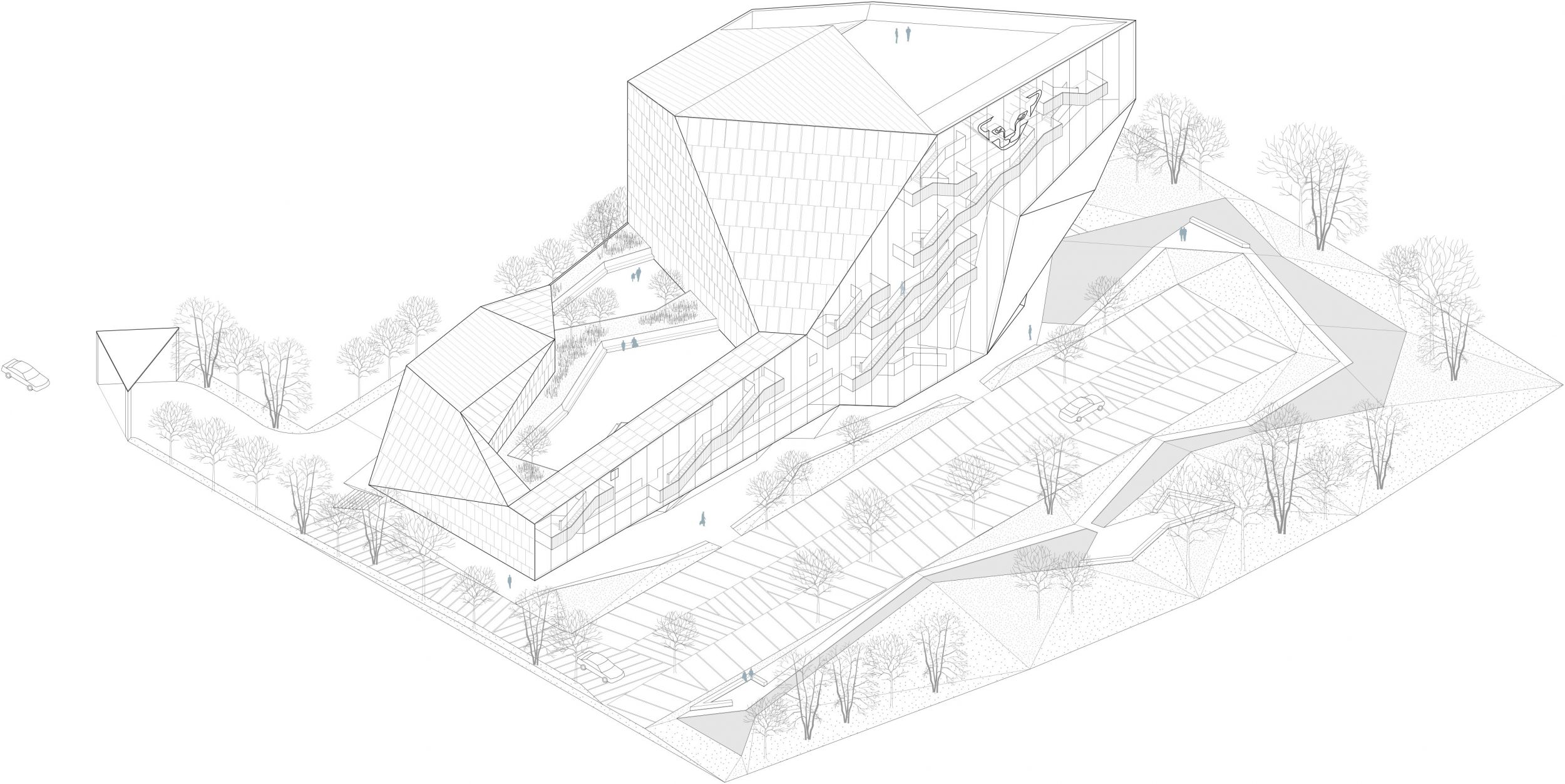 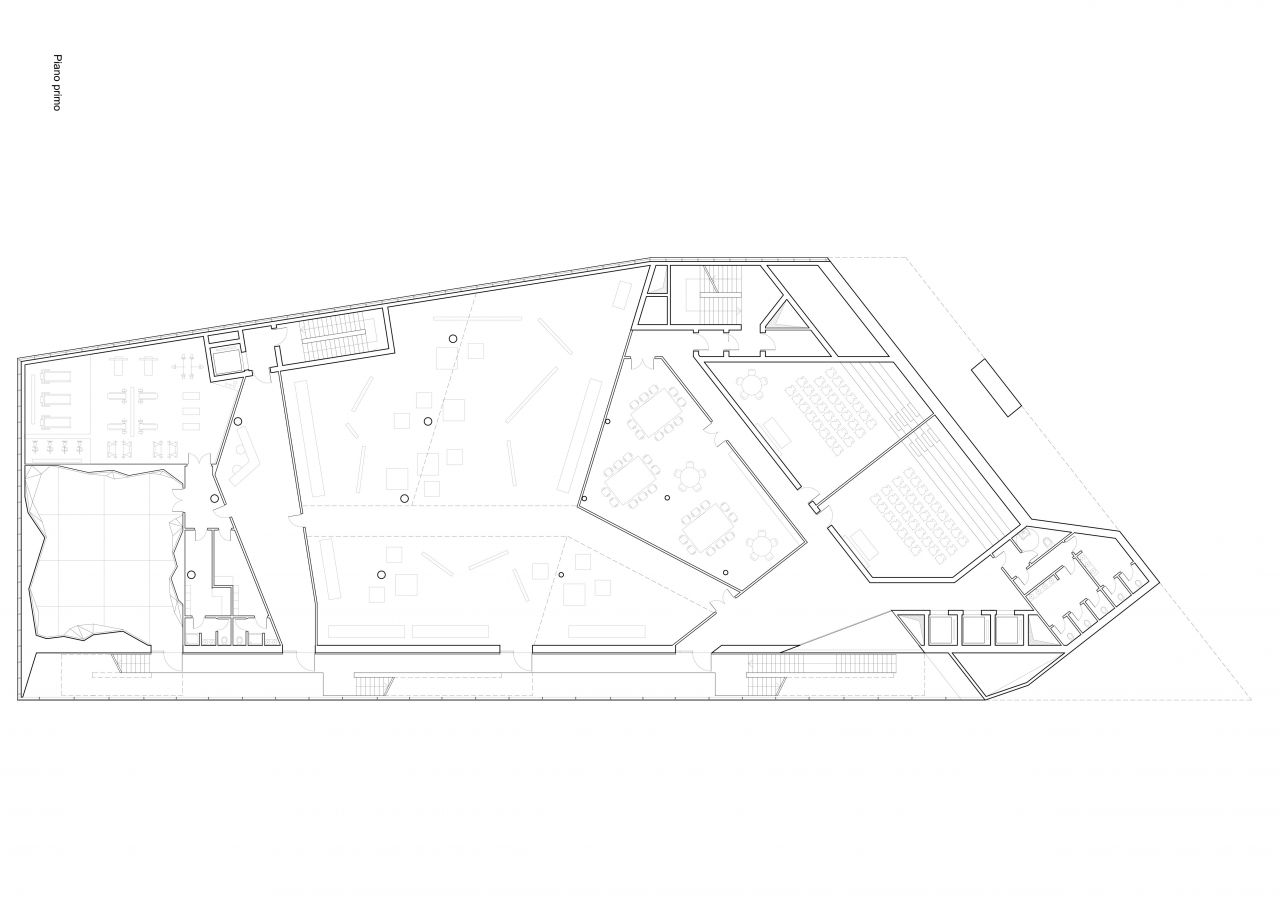 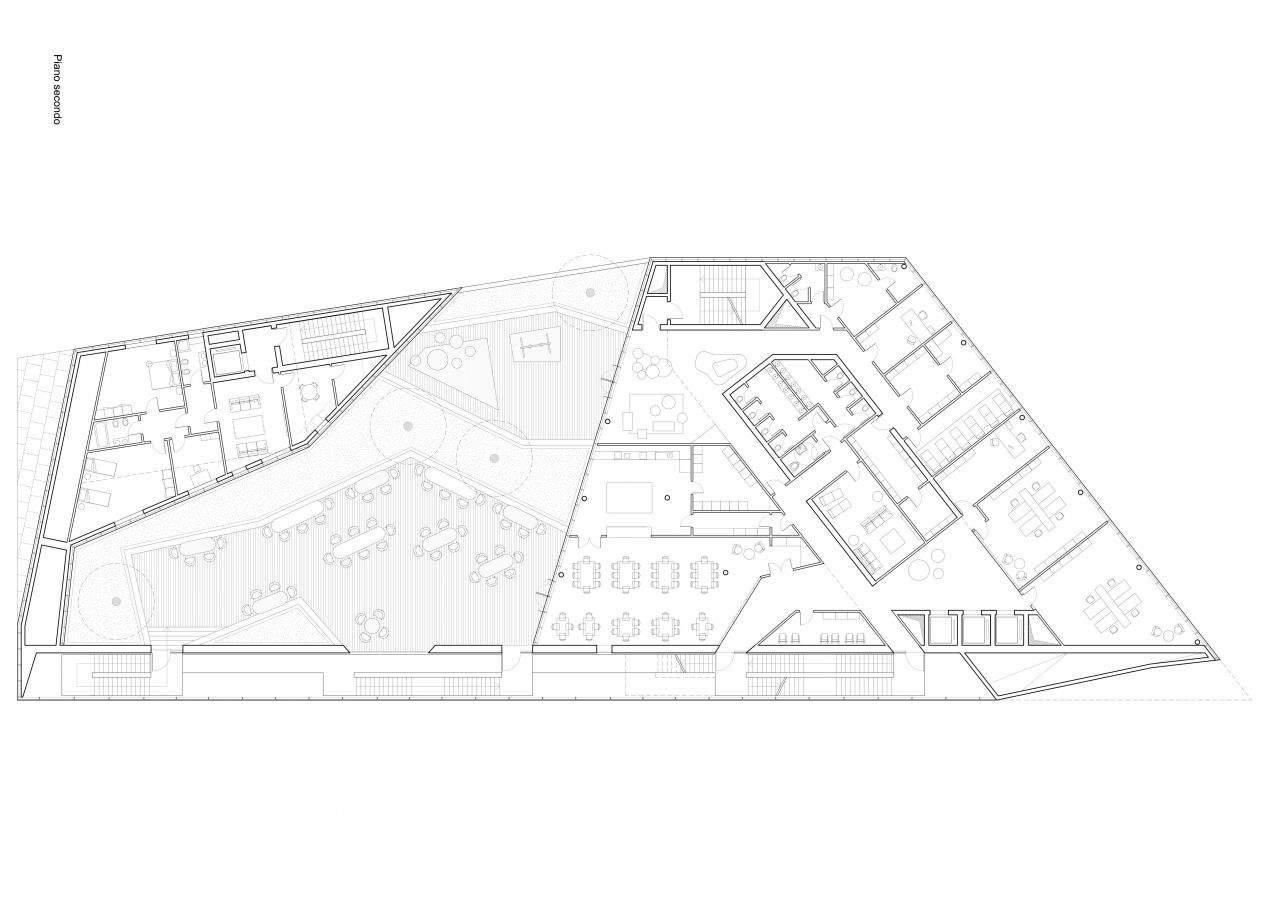 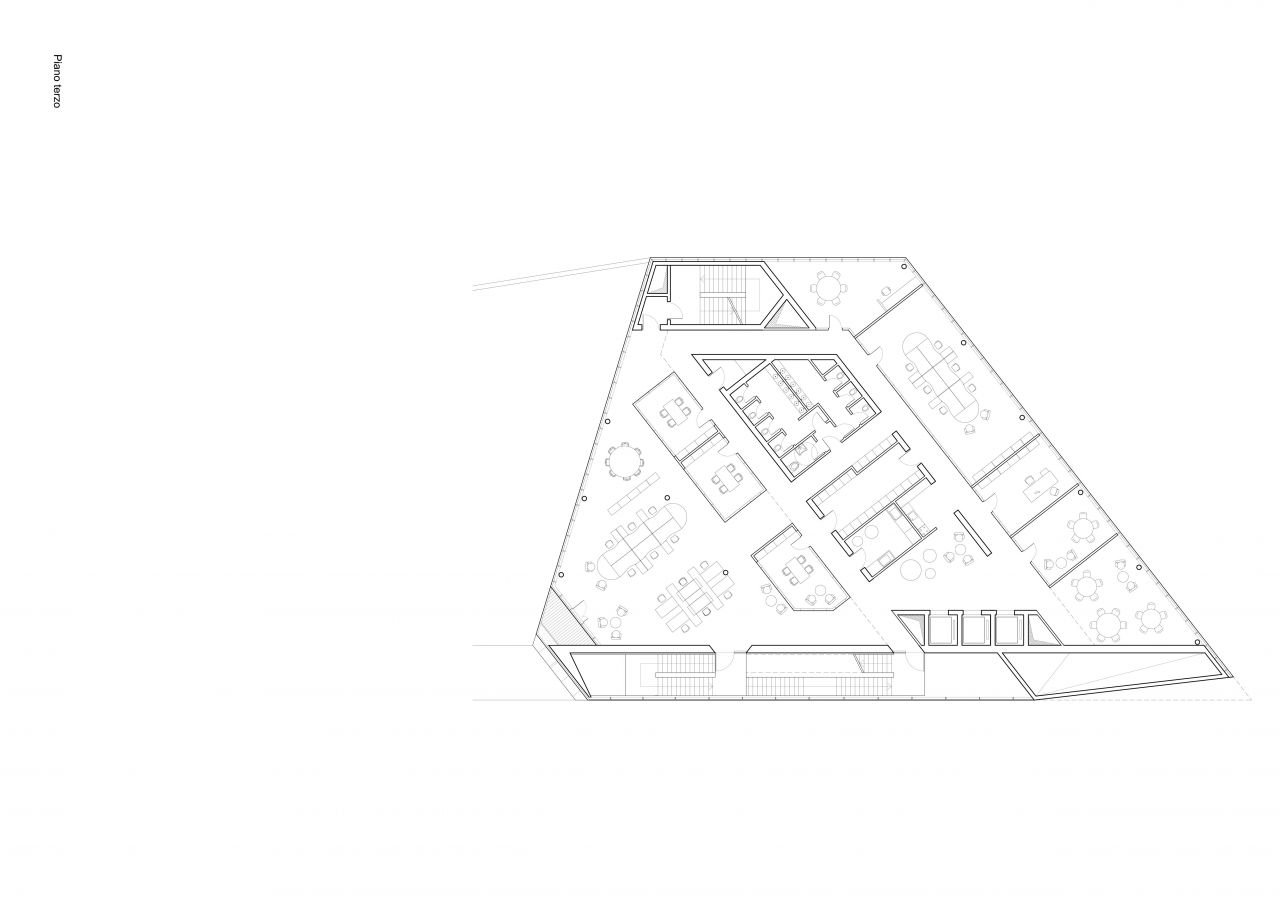 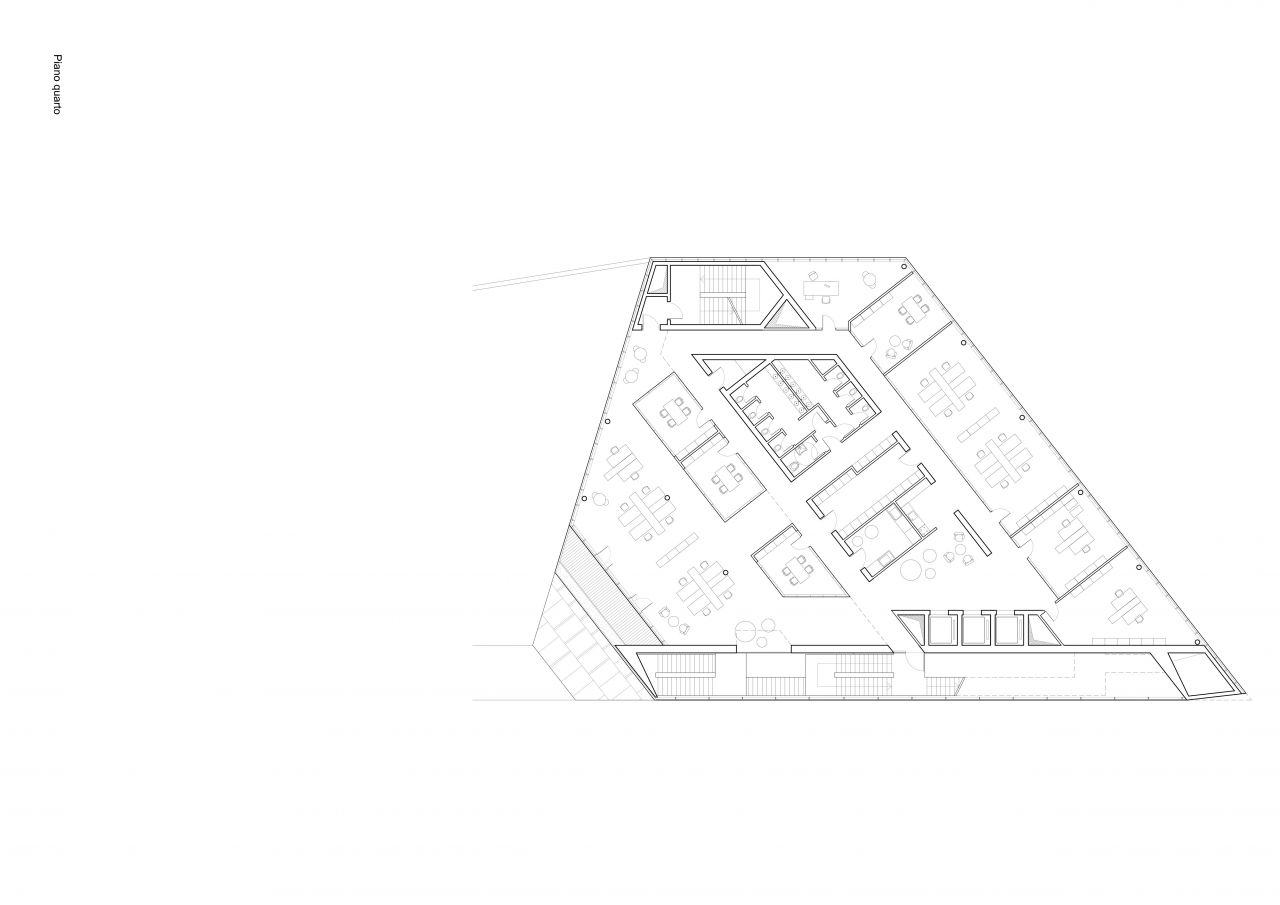 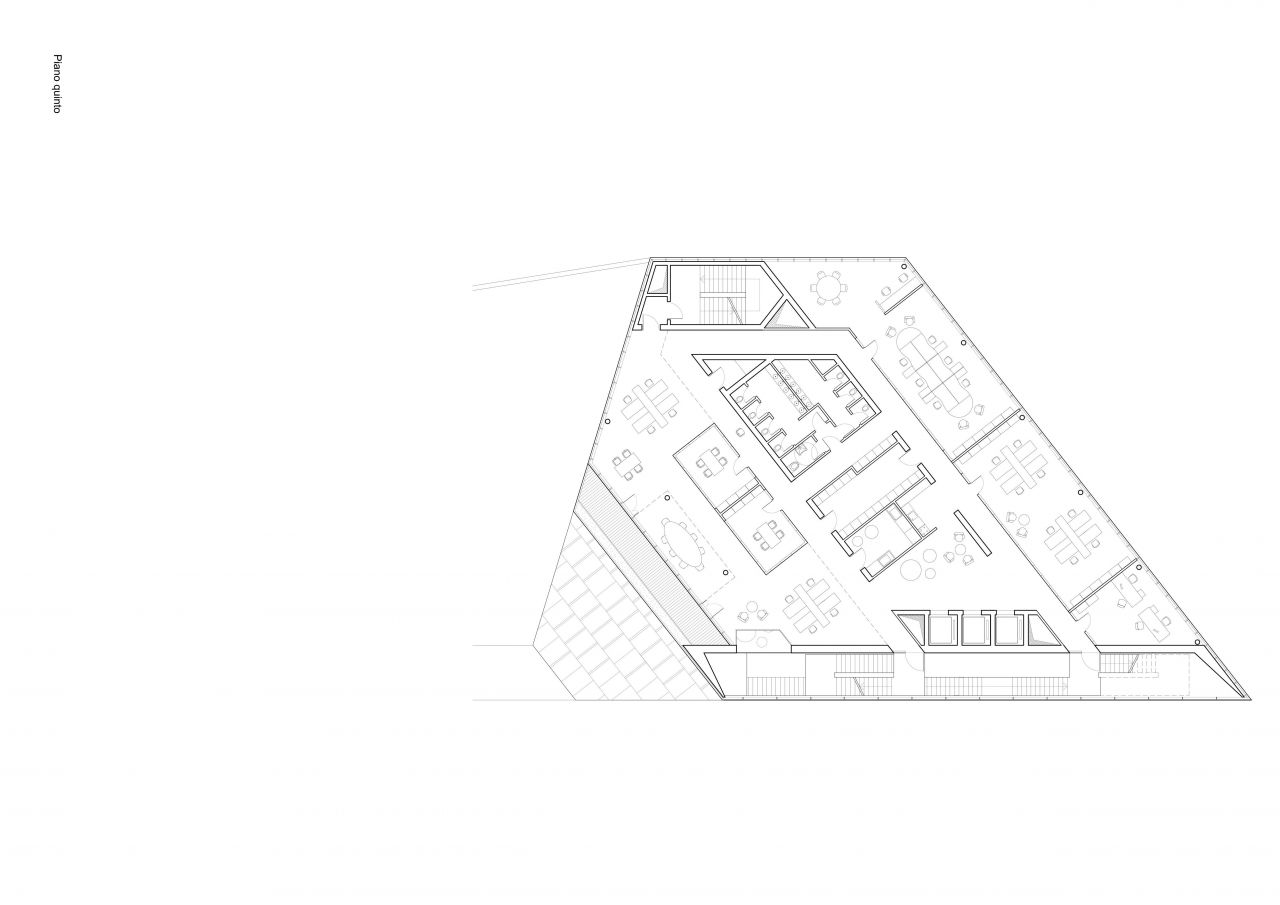 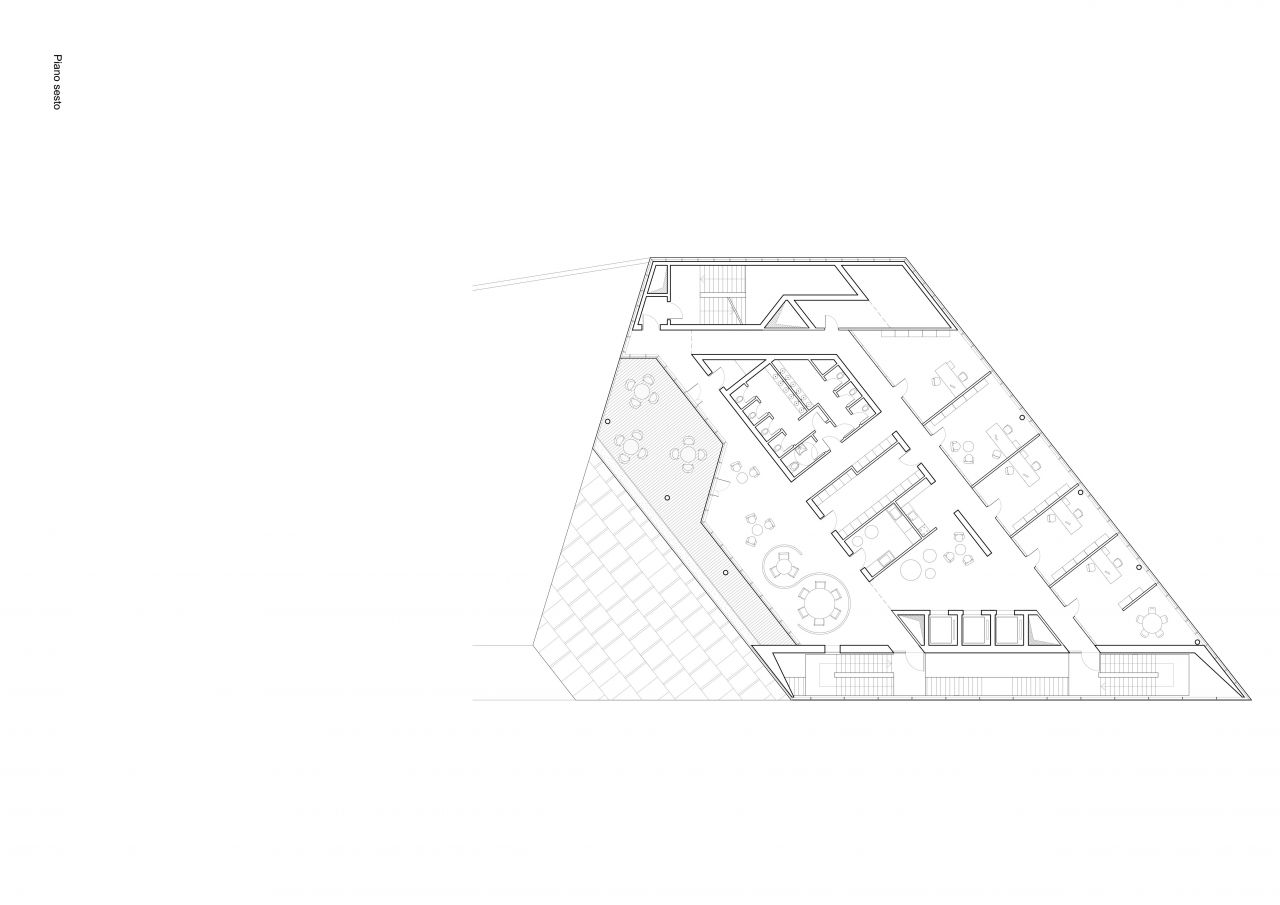