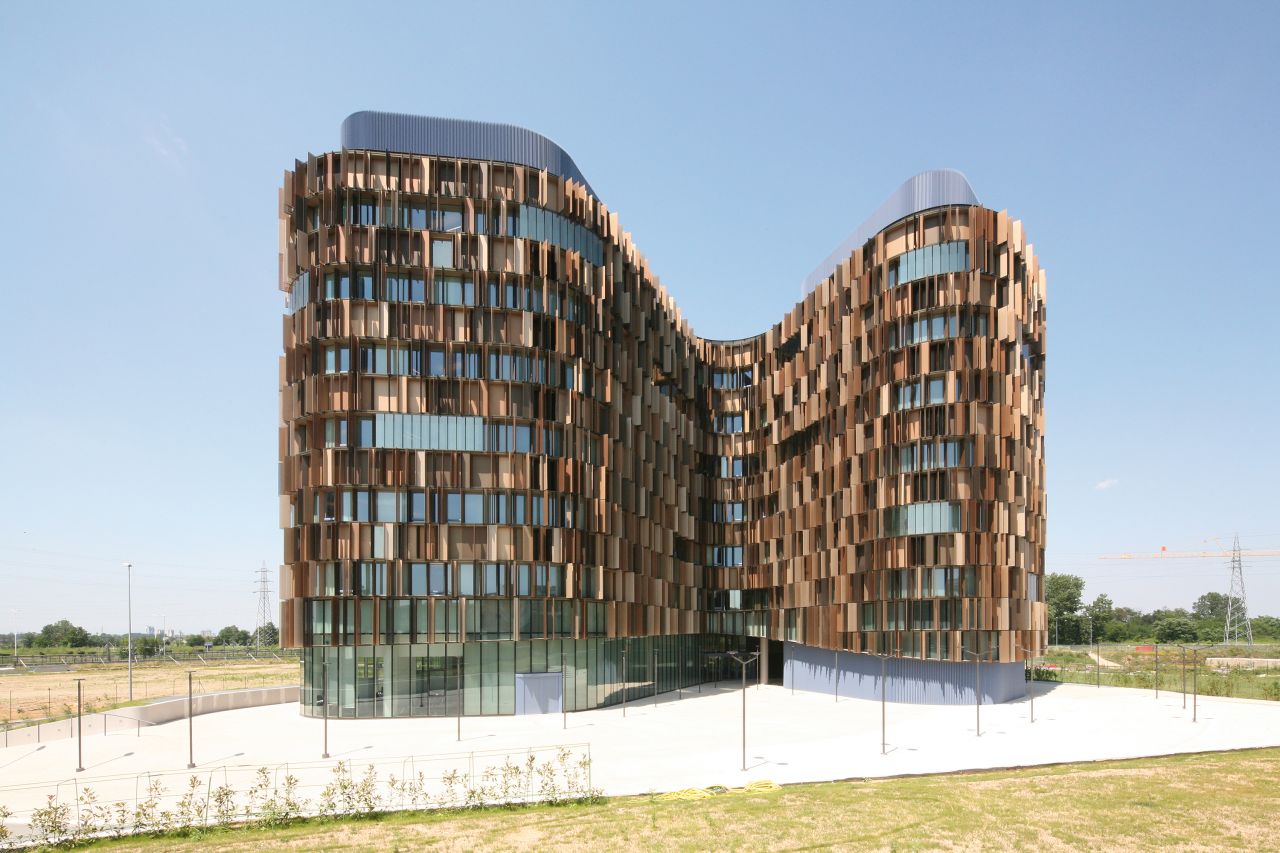 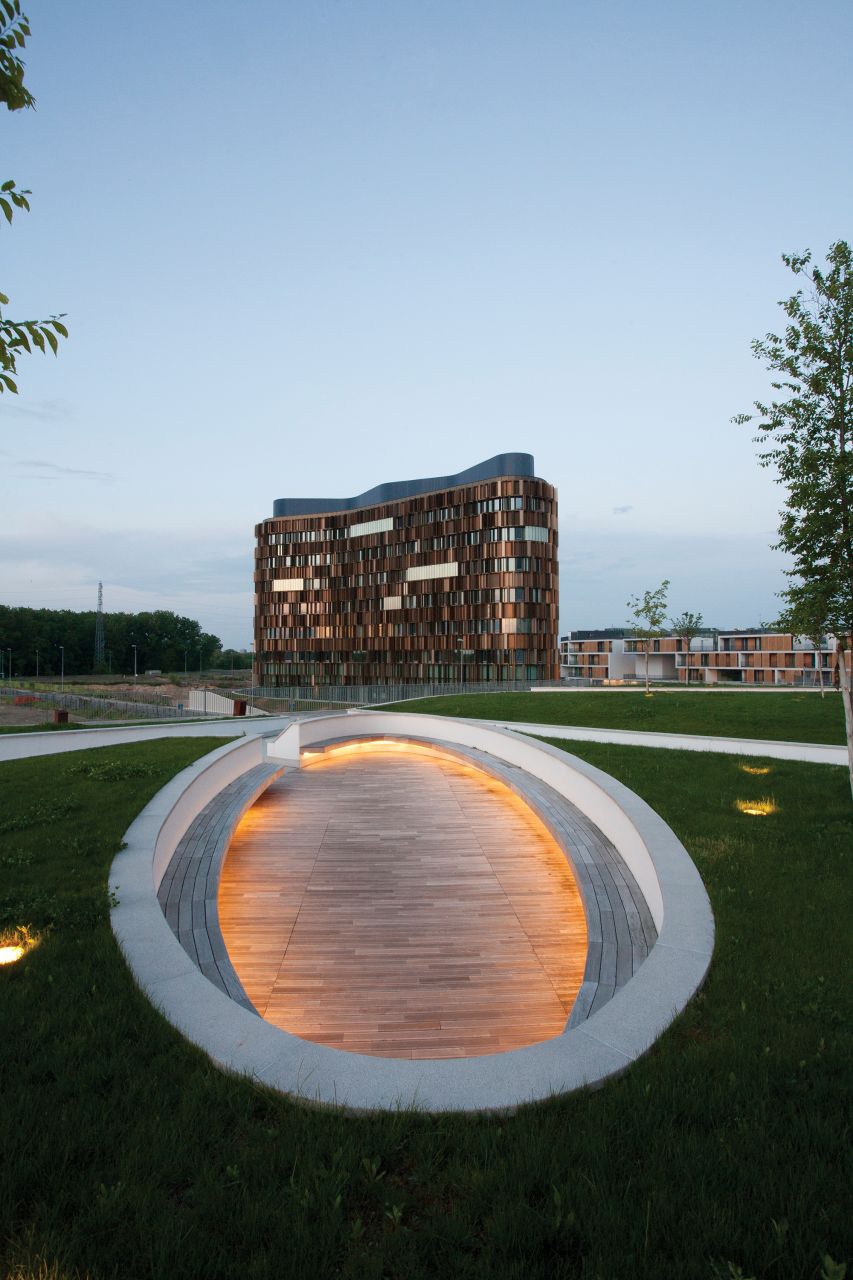 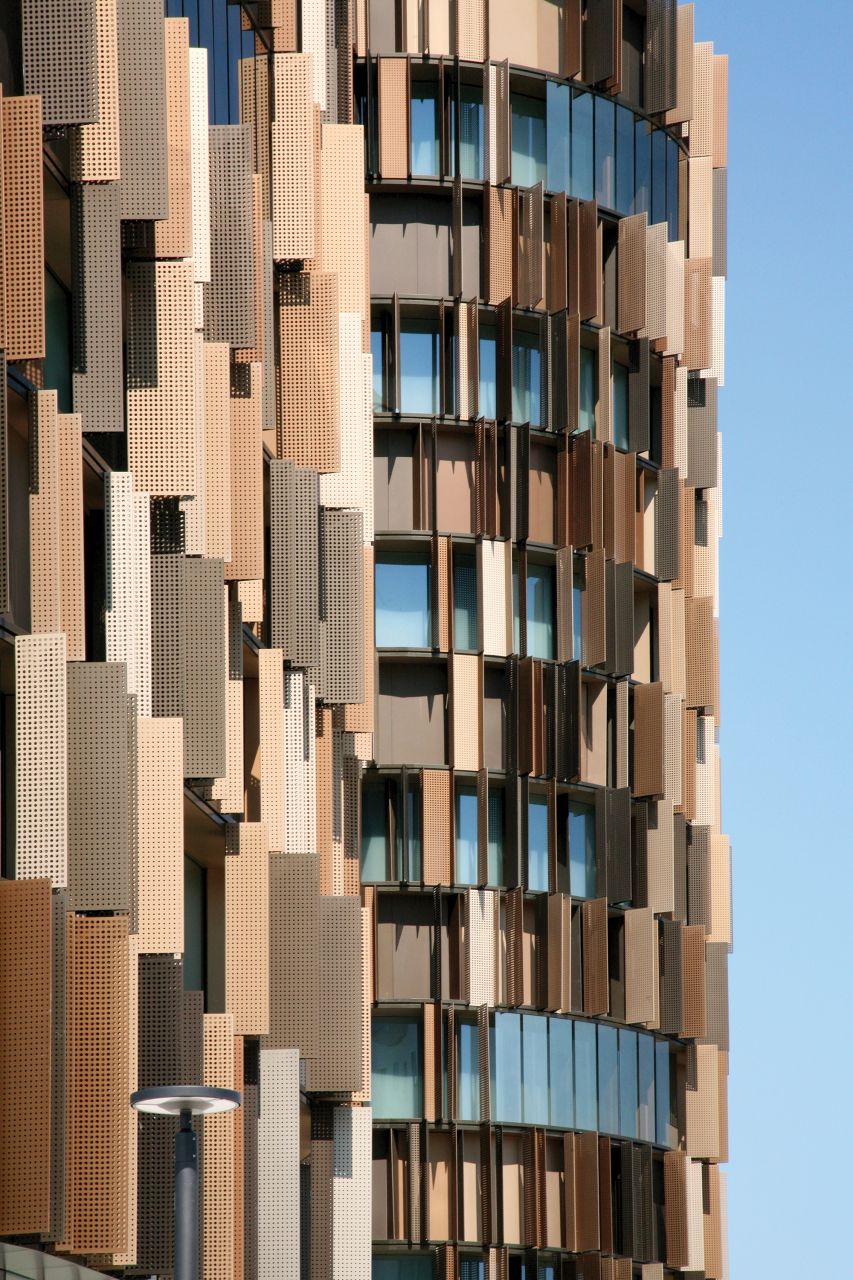 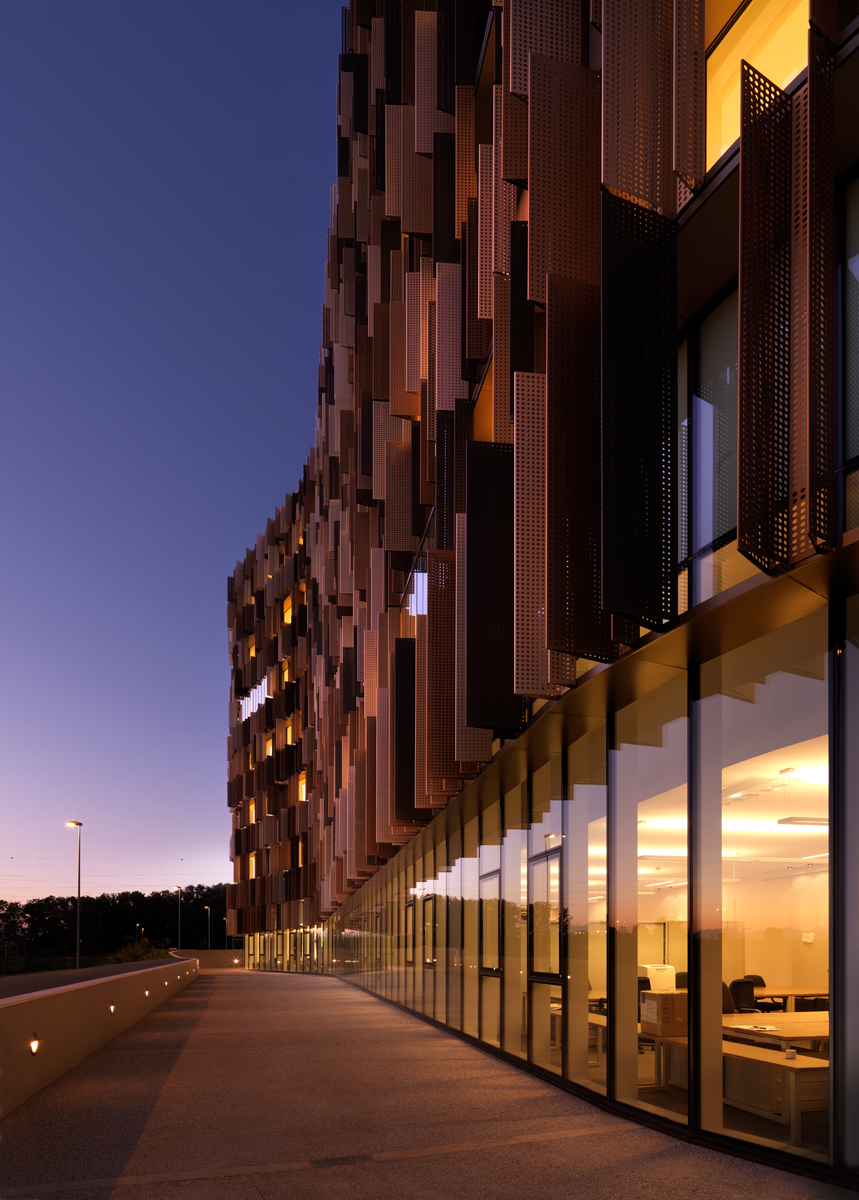 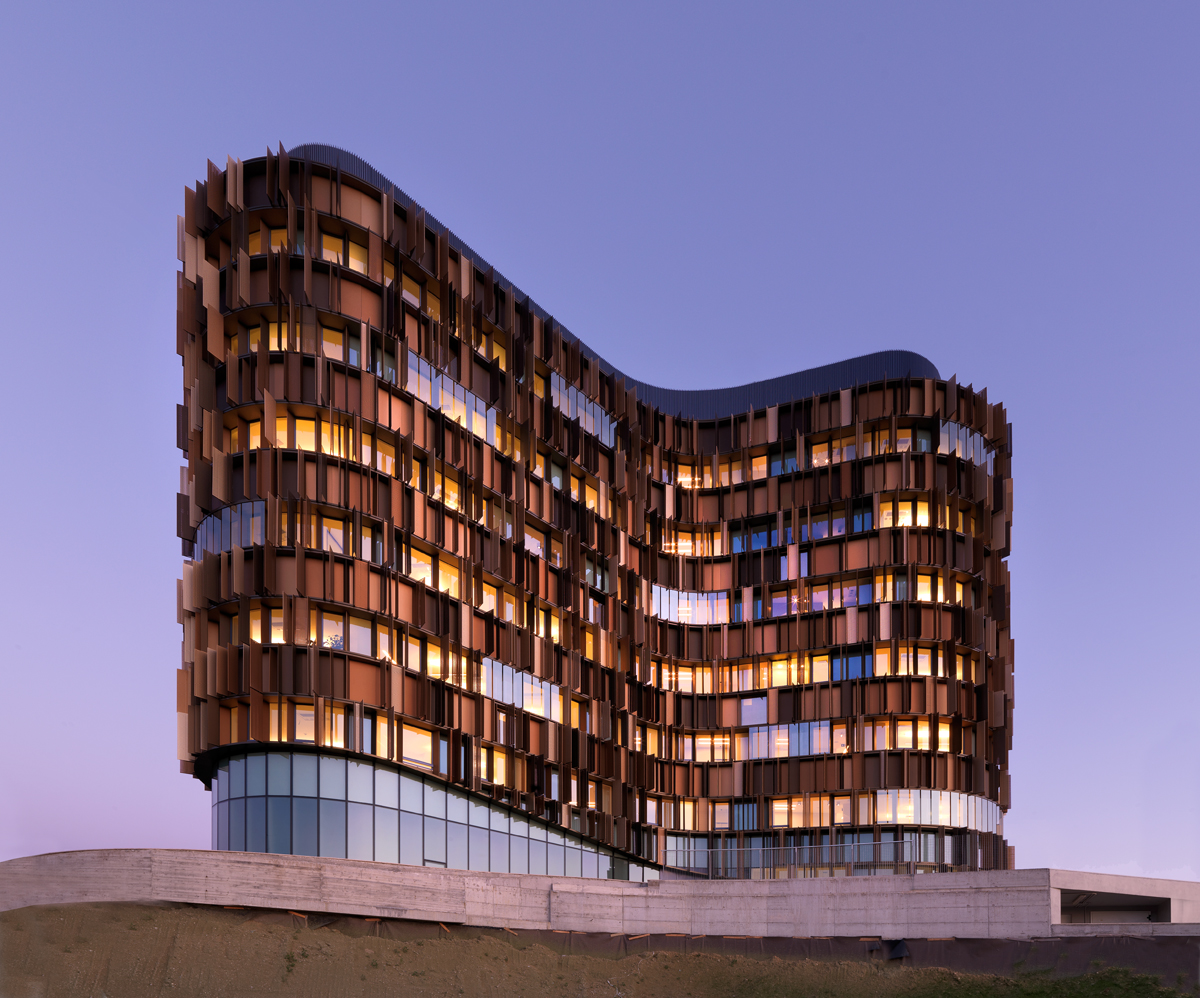 Dimension, frequency and puncture of brise soleil characterising the building’s sinuous perimeter were designed according to sun radiation angle and intensity on every façade. Their presence and metallic finishing in different hues transform the entire architecture in a big environmental sculpture with a constantly changing appearance able to amply hours, seasons and different meteorological conditions.

The U15 building is located in the new Milanofiori Nord district which is being built according to the master plan designed by Erick van Egeraat, in an area characterized by isolated buildings immersed in a park. The project adapts to the indications of the plan, accentuating the relationship between the building and the open spaces and the landscaping of the park, and considerable attention has been paid to the orientation of the sunlight and the environmental quality of the workspaces and the areas dedicated to relations with the public 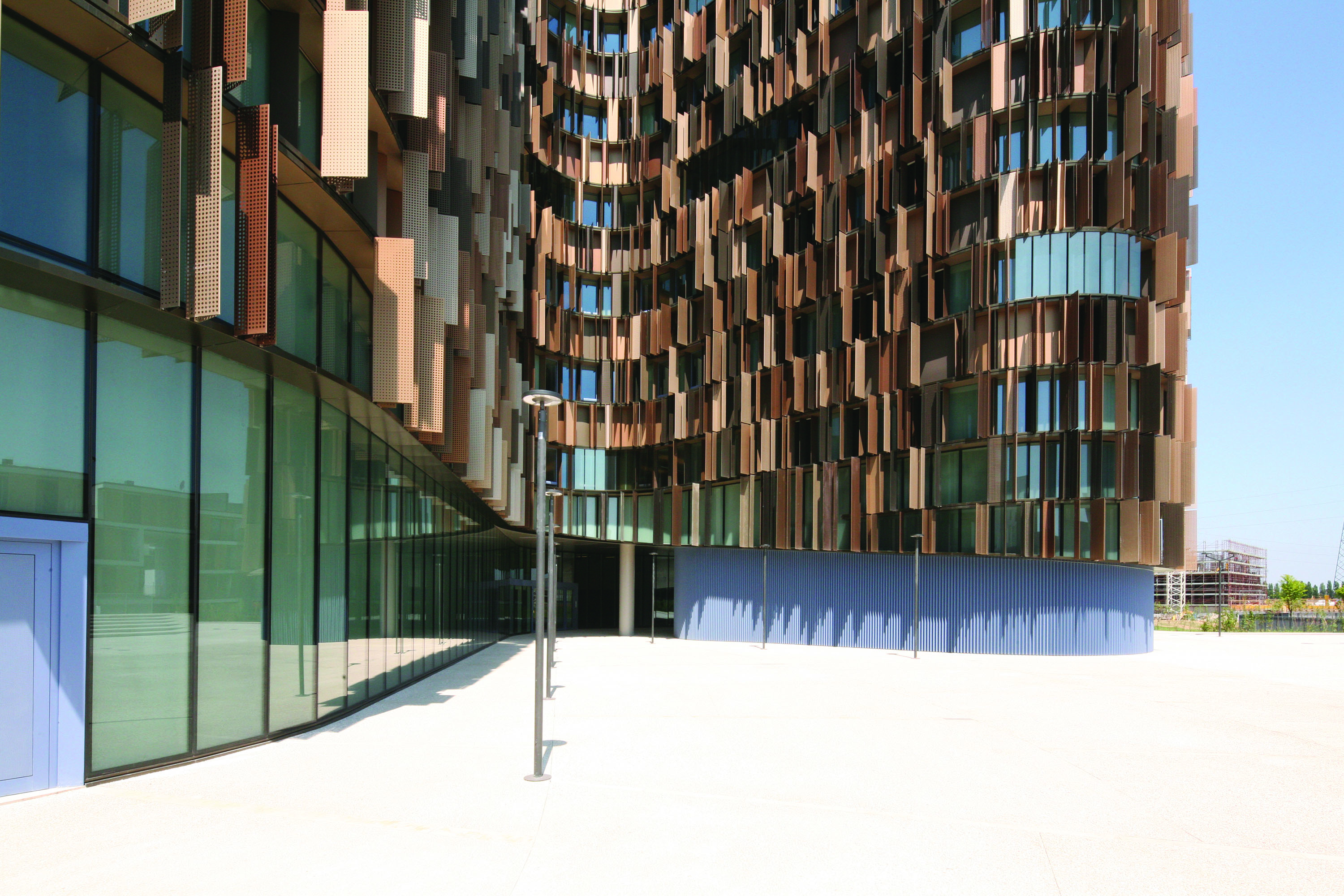 The ovoid form and the large size of the outer contour indicated by the master plan has been obtained by articulating the outer walls of the building and folding the margins inward, so as to create a distributive scheme that combines the best qualities of a H-shaped plan with those of a central distribution. The building is home to the headquarters of one of the world’s biggest media investment corporation, which has united many of its agencies operating in the fields of advertising and marketing into a single building. On the southern side the continuous geometry of the outer walls gives rise to a deeper inflexion which envelopes a court that opens up to the landscape. The two basement floors, which contain system areas and parking spaces, form a green podium that is slightly raised from the level of the street, and can be reached by a slope on which pedestrians and taxis are guided towards the entrance court.

The ground floor of the building, which hosts the reception and other areas dedicated to interaction with the public, is perceived as a continuity of the open spaces outside.

The distribution unit with lifts and stairs is in a central position, something which makes its functions flexible: two stair blocks positioned at the southern extremity of the two V-shaped bodies assure escape routes in compliance with fire regulations.

The depth of the building’s wings and the position of the vertical structures have been carefully studied in order to maximize the environmental quality of the offices in terms of outlooks and the possibility to subdivide the floors in separate units and the arrangement of the interior in rooms along corridors, with an open plan or office landscape and combinations of these solutions.

The structure and the shell.

The building structure consists of cylinder-shaped columns and thin horizontal floor slabs in reinforced concrete, cast on side on prefabricated formwork. The outer shell is divided in several layers which, combined, contribute to assure the required performance in terms of environmental friendliness and energy efficiency. The innermost layer features an alternation of a strip with windows and doors with an opaque parapet forming a band, covered by panels in anodized aluminium.

A series of horizontal elements placed at regular intervals support an external system of fixed sunscreens made from bent sheet aluminium with different profiles and depths, anodized like the elements mentioned in the foregoing, in four colour variants from brown to gold, perforated with a numeric control system.

The horizontal elements offer protection from the high sun from south during the summer months; the vertical development of the sunscreen elements is particularly suited to protect from the sun from the east and especially from the west during the last hours of the day in summer. Near the communal areas on the different floors there is a series of glass elements positioned flush with the outer walls, which may serve as greenhouses. On the ground floor the outside of the sunscreens form a sinuous profile which echoes the landscaping of the surrounding green areas. 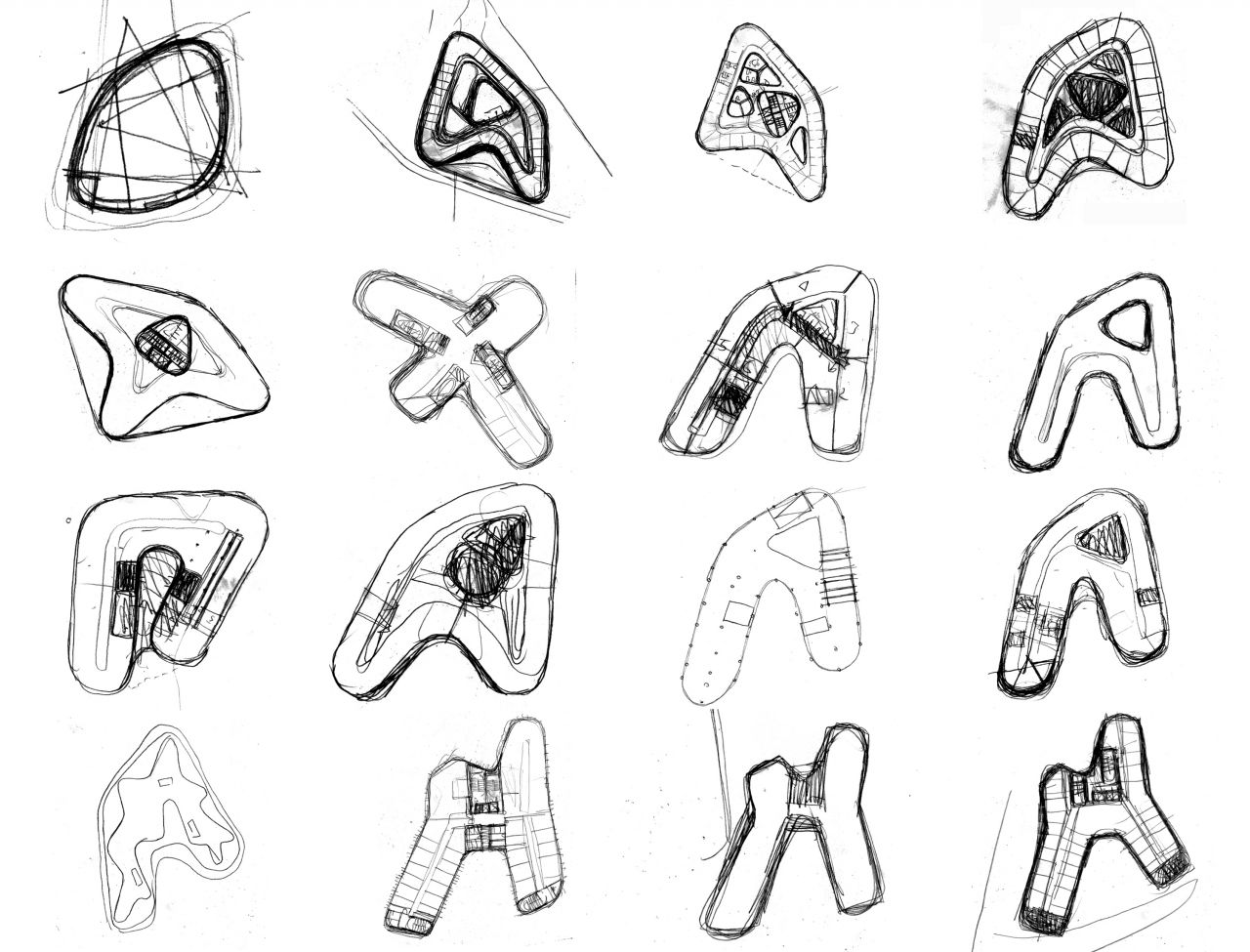 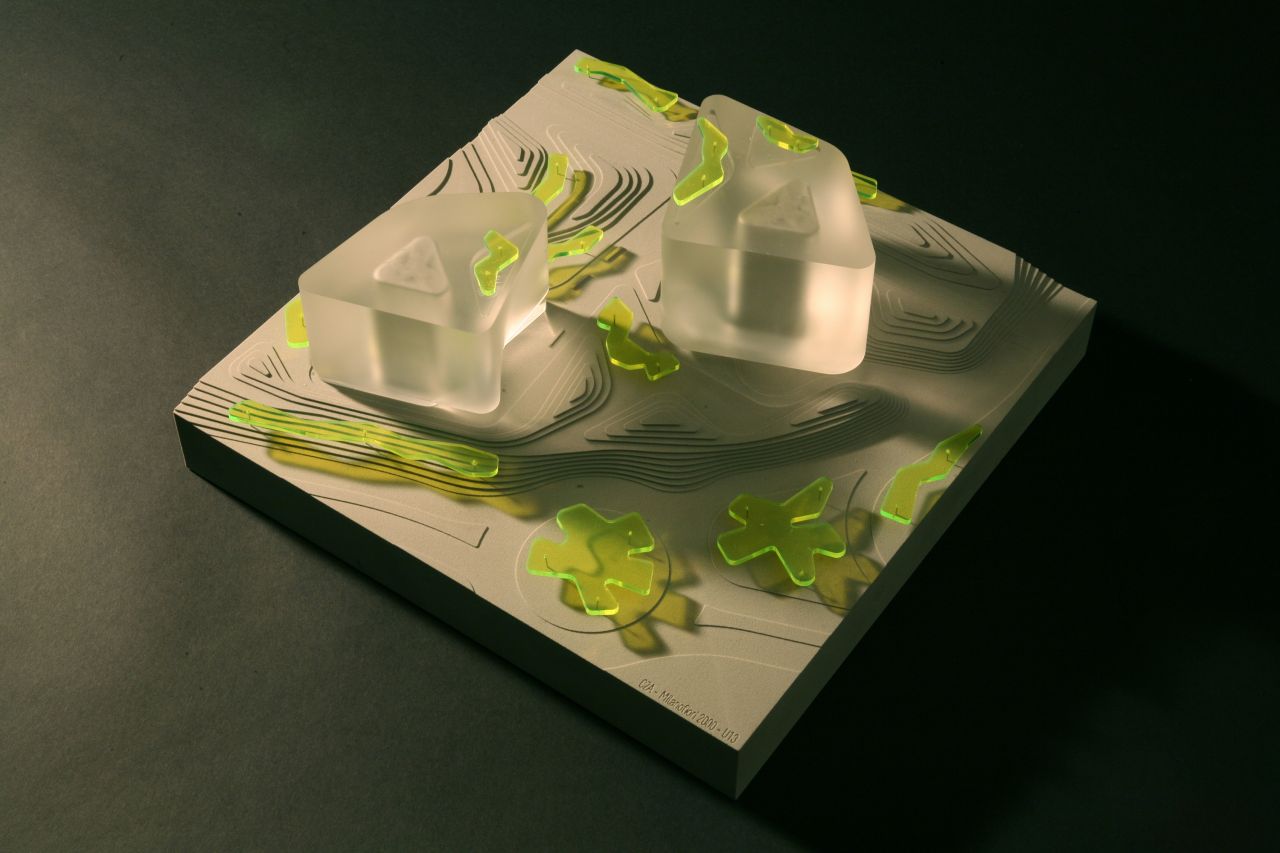 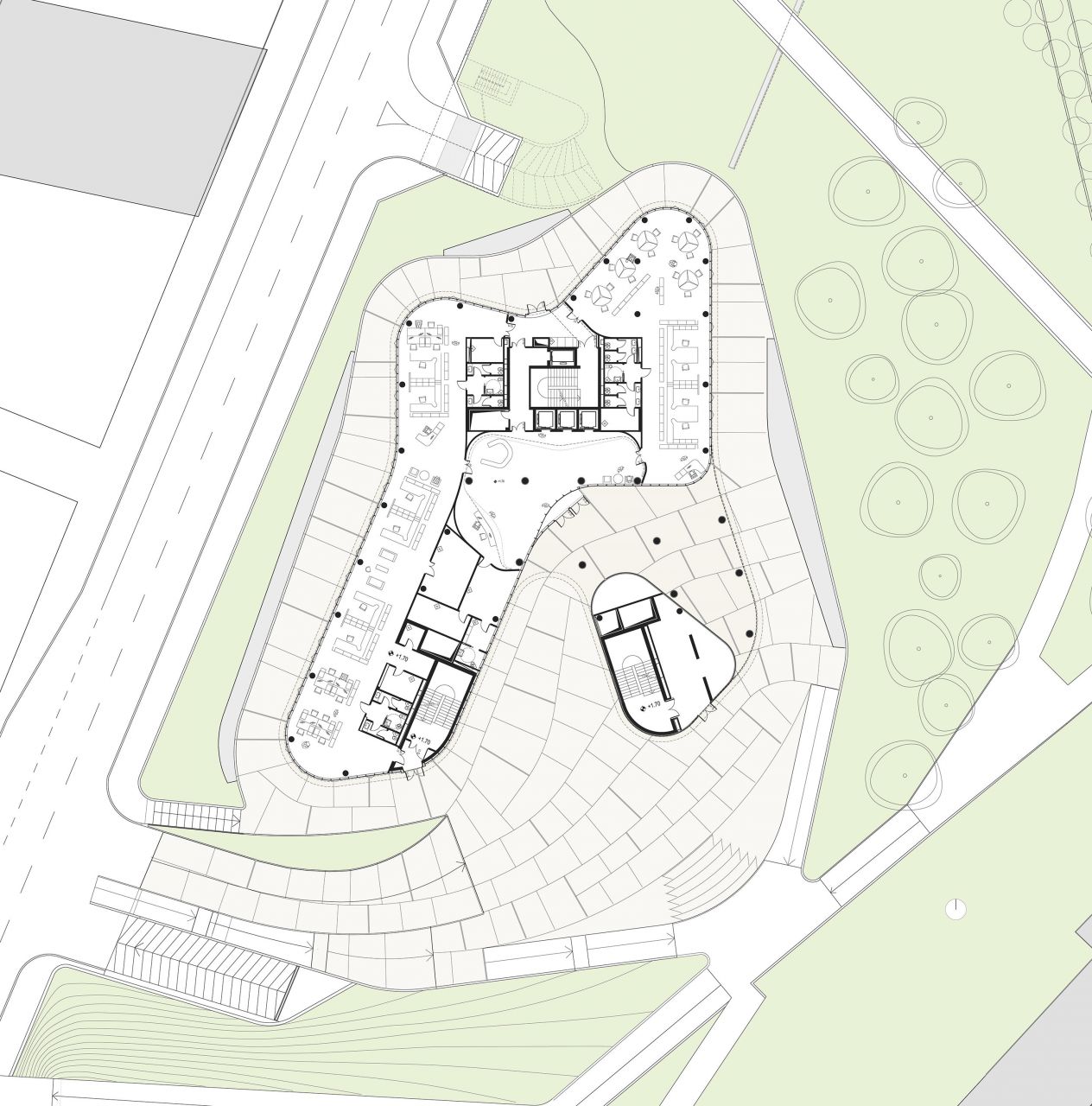 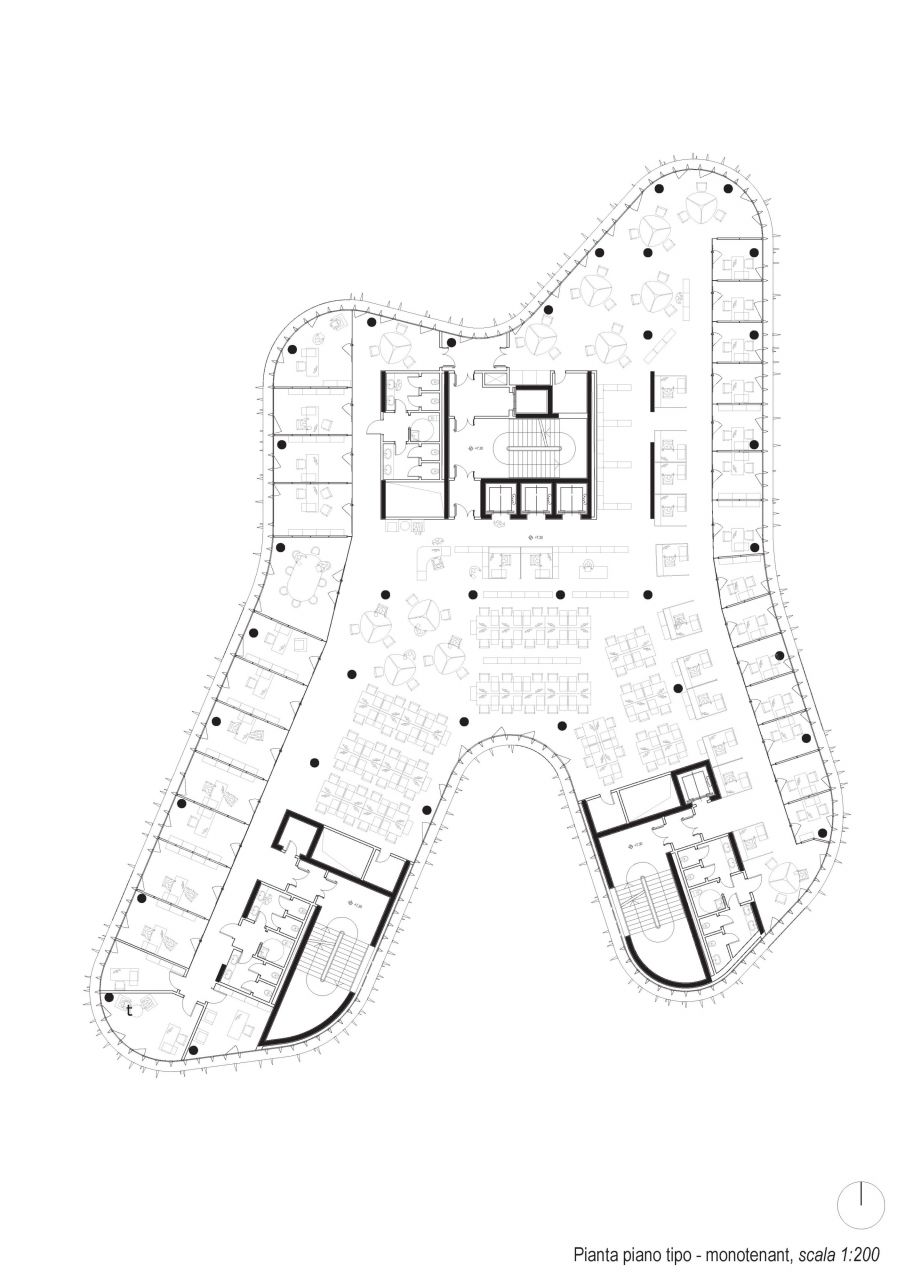 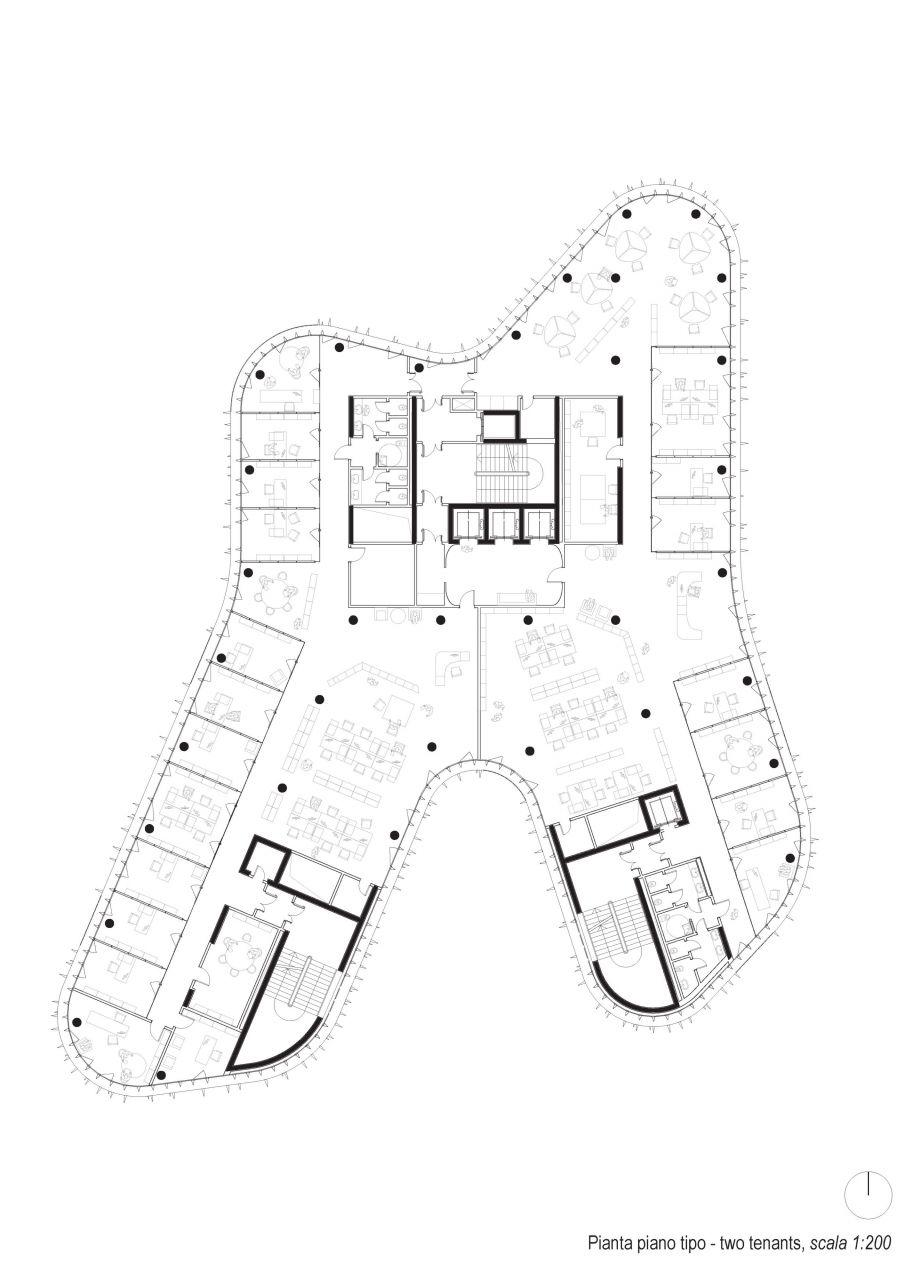 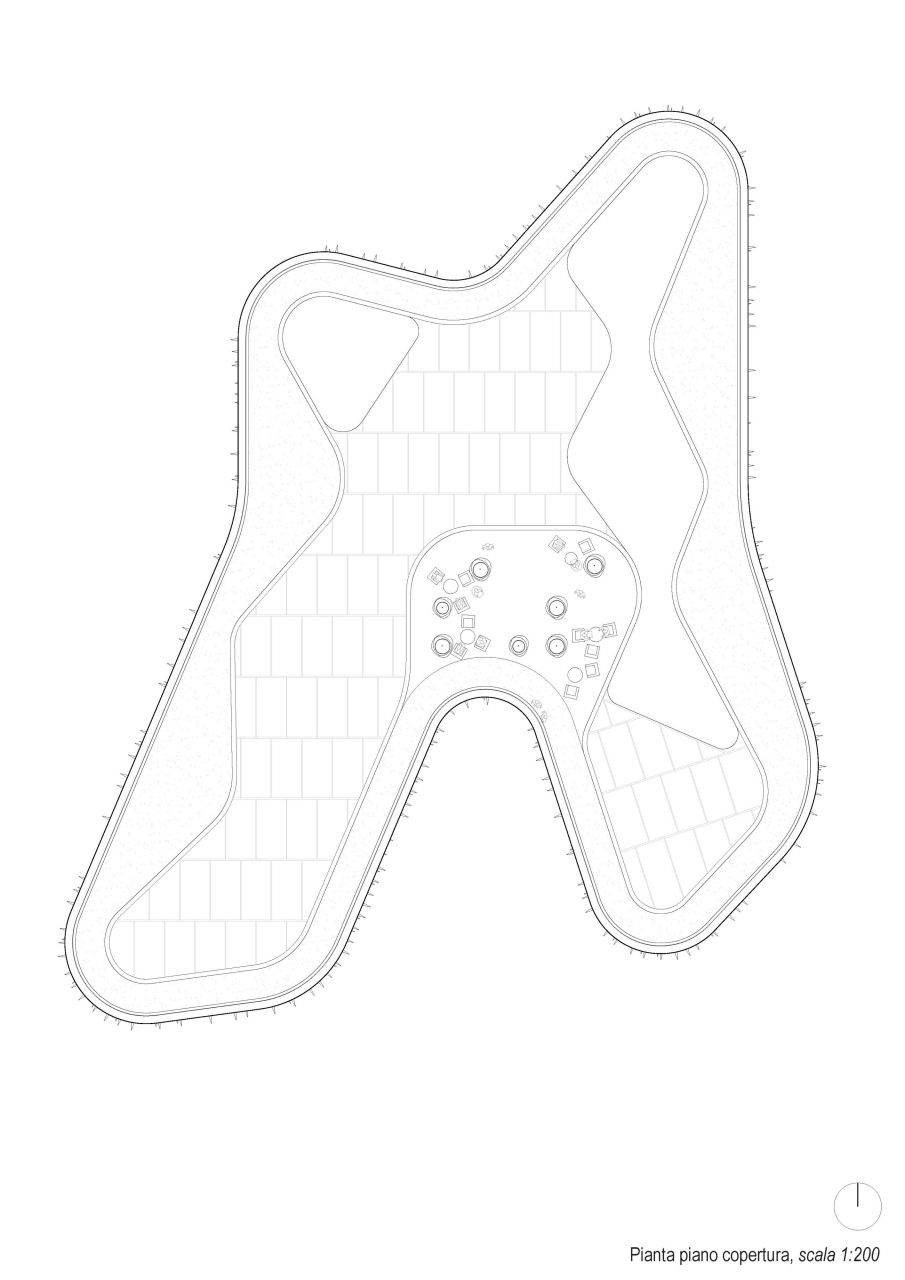 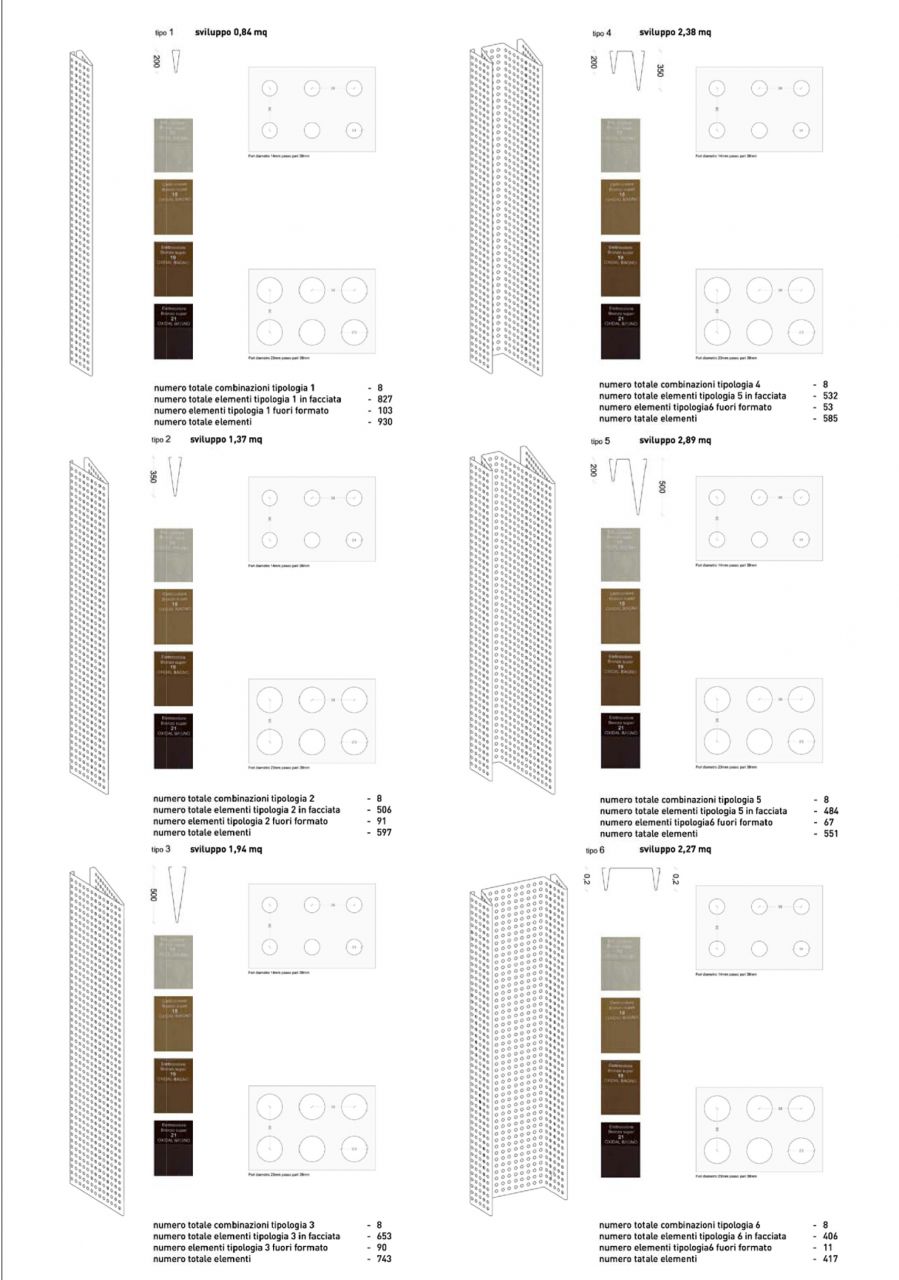